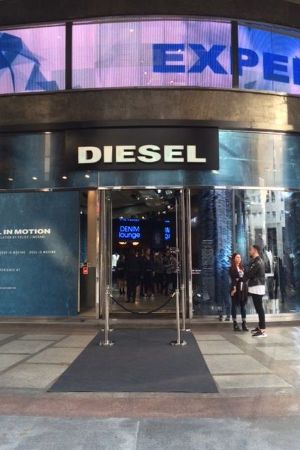 by Maria Cristina Pavarini — May 07, 2015
Renzo Rosso, president of the OTB Group, has celebrated the beginning of Milan Expo 2015 with a party, an installation and a series of initiatives taking place in his Milan Diesel Planet Store in Piazza San Babila.

“I think Milan and Italy can highly profit from the Expo despite many have realized it only now and so belatedly,” commented Renzo Rosso presenting his new “Diesel in Motion” store installation designed by Felice Limosani, a digital storyteller.

The installation is made up of huge rotating washing rolls – all covered with denim - similar to those used in car wash centers. Limosani liked the idea to recreate the same sensation kids experience when observing moving rolls from inside their daddies’ cars.

During the whole time of the Expo 2015 (from May to October) the flagship will host this installation plus a series of different initiatives. Among them there is the Denim Master Studio, just debuting for the night and offering a new customizing service through which consumers can have their new denim pair personalized with crystals, studs and rivets.

Commenting on OTB holding’s 2014 balance sheet, its financial situation and future plans Rosso stated: “We are happy for the present moment. The group is solid and we are working hard to redesign the Diesel brand from scratch in terms of a total upgrade and distribution network.”

OTB closed 2014 registering €1.56 billion, similarly to 2013 (€1.57 billion), though significantly increasing its net profits to €5.5 million, which were €1.2 million in 2013. However, its Ebitda was down by 14.9% at 117.4 million euros, mostly due to exchange rates compared with 2013, since yen recent devaluation - and Japan represents 20% of the group’s revenues. OTB has finally posted a positive net cash position of €105 million plus new lines of credit, making up €200 million. With this in mind they can also consider the acquisition of a new brand.

Referring specifically to Diesel, which represents 65% of the group’s sales, they have cut part of their distribution: “For Diesel we made a bold move by cutting our distribution for about €85 million wholesale (about €250 million retail). I will see less ‘beautiful’ figures in the near future but it is worth if we want to give new energy to this brand,” he continues while explaining how all the brands of his group are performing well. “Margiela, Marni, DSquared, and the other brands are all growing well and register a yearly double digit growth.” And referring to Diesel he continues: “This repositioning strategy is worth it. By end 2015, Diesel will sell about €950 million and we expect it to reach about €1 billion by end 2016 – which is our target for Diesel. Also Nicola Formichetti’s new creative direction has already started introducing most spectacular, cool and great products. Consider how impressive his three Tribute collections focused on denim, leather and sports have been, plus his fourth one, which will be released soon, is expected to be a hit as well....” 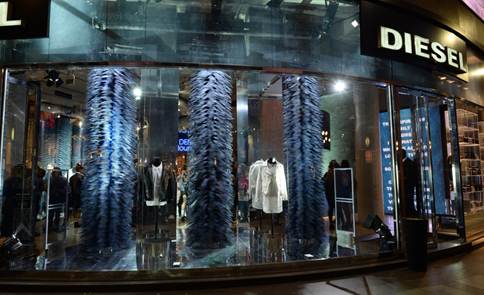 Another plan is to focus on significant new store openings. “Between new openings, redesigns and relocations we will open 120 new stores till 2018,” he explains while referring to the aim of creating new, strong and impactful stores. “We closed our flagship store in Rome’s Via Del Corso and opened in the prestigious Piazza Di Spagna. In September 2015, in New York we will open a 300-sq.meter store on Madison Avenue, on the corner of 59th street, after closing our Fifth Avenue one. In Shanghai, we have already opened the most spectacular 1600-sq.meter flagship store in Kerry Center: it is designed as a huge and impressive Diesel home. Each ‘room’ of that “house” represents a part of our offer – the living room for denim, the bathroom for perfumes and cosmetics, the wardrobe for bags and leather items, just to name some.” And continues: “Also this about 1800-sq.meter Milan store will be totally redesigned and rebuilt. Work will start at the beginning of 2016 and will take a while because we will change it completely with the support of a team of Japanese architects... And it won’t be a matter of including a bar or a restaurant - consider that already in 1990, in my New York store, I organized parties and opened a restaurant there. We have greater plans and want to do so much more...This is the direction the brand is taking.”