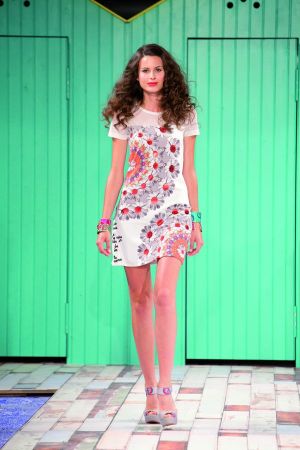 by Maria Cristina Pavarini — January 22, 2013
A new course is starting for Desigual soon. The Spanish brand's colourful collection will be offering more mainstream products. The brand, strongly characterised by the use of colours, bold prints and applications aims at reaching a greater number of consumers - including more sober and adult ones - while communicating more through TV spots, catwalk shows and fashion weeks.

“Our aim is to place at least one Desigual garment in each consumer's wardrobe of the world," Desigual's managing director, Manel Jadraque. “We want to focus more on our own brand's identity based upon three strong elements - Sex, Fun & Love, the three main ways to enjoy life, according to us - and go more mainstream in terms of product." This is how Jadraque refers to their new communication strategy, which, launched in December 2012, and aired across Spain, France, Italy and Germany, has taken shape as a TV spot series.

The new provocative spot “Tienes un plan?" (watch it here) called attention in Spain where it registered 1,000 downloads through YouTube and raised polemics. “Our future aim is to continue being coherent with our own brand's message. This time the polemic was the drive, and in general we want to continue focusing on this, while offering a more mainstream collection, that is also offering a series of quieter and softer products, in order to reach always more consumers." Right now Desigual's seasonal collection counts 1,200 items, including accessories (80% aimed at women and 20% at men). From now on about 20% of the collection will consist of more mainstream products.

Desigual expects to close 2012 with €700 million sales, 25% more than in 2011. “For the next three years we expect an about 15-20% growth per year, that is an organic growth level when referred to established markets as the European one. Our growth rate is no longer around the yearly 70% as in the past - but around 30% as registered in 2012. Our aim for the years to come is to grow in each channel (retail and wholesale), in each product category and markets (established and new ones)." In Europe their major market is Spain (it counts for 20% now even if it meant 70% of our sales only three years ago). Their second market is France (16%) followed by Germany (12%). 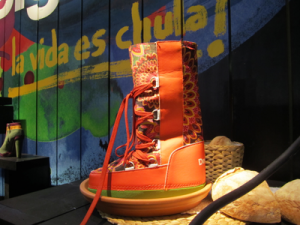 Footwear is a growing segment for Desigual
They want to increase their market quotas also in their newly launched categories - footwear and living - and expect to sell their footwear collection to 1,000 stores and their living collection to 2,000 stores in Europe.

In terms of new markets they want to expand in new areas such as Asia, North and South America. They opened new headquarters in Hong Kong six months ago and in Tokyo ten months ago. Their future aim is to reach 6% of the total turnover from Asian countries in a year as well as open 15 own stores and sell through 1,000 multibrand ones. Right now Japan is the major Asian market (60% of Asian sales) and the primary market where to expand in Asia. In America they opened a showroom in New York three years ago and now the US count for 8% of the company's total turnover. They will inaugurate a new showroom in South America, in Rio De Janeiro by March 2013. By the end of this year they expect to open nine stores in Central America - mostly in Mexico and Brazil.

Just over a month ago Desigual inaugurated its new headquarters (see SI's coverage here) near Barcelona. Its new offices measure 20,000 sq meters and occupy four floors and host all divisions apart from the sourcing and financial ones. The new offices are presently hosting 890 people, 150 more than in 2011 and have two peculiarities, as explained by Jadraque: “There's no fixed place for anyone. Anyone can sit and work from his or her own laptop. Everything is integrated and electronic and there is no paper around. Anyone can sit on any table of a certain 'neighbourhood', according to tasks and job, though always moving in that area, and meant to increase communication and synergies with other people. Only exception is for the creative and product department where they need to print sketches and work according to defined seating positioning and team division." Also new is that 20% of space for each floor (about 400 sq meters) is occupied by sofas, games and TVs where people can spend time communicating with others.