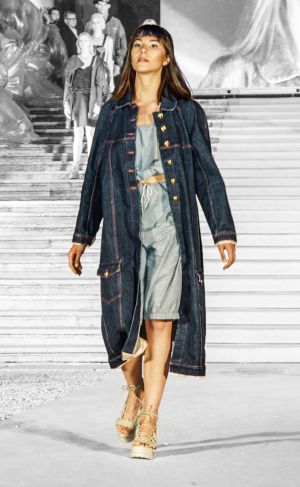 This year’s Isko I-Skool contest included a new extension of its yearly contest, involving young designers that ended last July with “The Night Is Young” fashion show in Treviso, Italy.

This latest initiative promoted the entire global educational project through social media. Facebook users and followers of the Isko I-Skool Facebook page were invited to vote for one of the 20 shortlisted projects, presented by the students from some of the most appreciated fashion academies in the world, who participated in the third edition of the Isko I-Skool Denim Design Award.

The winners of the Isko I-Skool Denim Design Digital Prize are:

David Caracuel (from FIDM – Los Angeles) who won the first prize with the project “Air Force Urbanite”, presented for the “Renovated Denim Icons” mood. He received 25% of the votes and won a Digital Reflex Camera as well as 200 meters of Isko denim for his school.

Anna Biotti (from IUAV – Venice) won the second prize with the project “Wendy”, presented for the “Renovated Denim Icons” mood. She received 23% of the votes and wins 50 meters of Isko denim.

Alessia Gozzano (from NABA – Milan) won the third prize with the project “Alliance”, presented for the “Jool” mood. She received 14% of the votes and wins 25 meters of Isko denim.