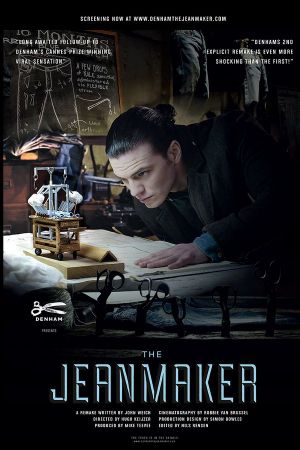 Poster of 'The Jeanmaker' movie
Stories

by Maria Cristina Pavarini — April 20, 2015
On April 15th, on the opening night of Kingpins Amsterdam, Denham premiered The Jeanmaker, the follow-up of its previous short movie – Denham Psycho, an ironic cinematic send-up of urban hipsters, launched in January 2014.

This time the focus is on obsessive denim culture and particularly on the manic attention to the “perfect wear pattern” that characterizes both the people who make jeans, and the ones who wear them - including those working at Denham.
Instant vintage kits, crunchy denim and a Peruvian vicuña all feature prominently in The Jeanmaker, which follows a celebrated denim designer – the Howard Hughes of the denim industry. But as the collection launch nears, his unwillingness to compromise leads him to personal disaster.

The Jeanmaker is the second film in Denham’s ‘Explicit Remake’ series in which the denim brand re-imagines cinematic classics, transforming them into sharp contemporary parables.

“Working with Denham the last few years I’ve learned that jeanmaking is primarily about obsessing the details,” says director Hugo Keijzer, who conceived the Explicit Remake series and created The Jeanmaker with production company Mike TeeVee and writer John Weich. “But just when you think you’ve got this perfect uncompromised product you get sidetracked by new ideas. This short film captures the moment when you lose control of your creation.”

Denham’s founder Jason Denham continues: “These short films are our slightly absurd way of exploring our inner denim demons. It’s great to see the passion we put into our jeans return in the film.”