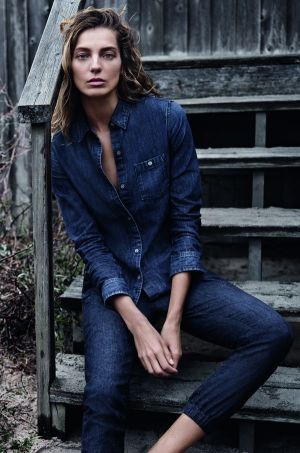 Daria Werbowy the new face of the AG Jeans campaign

by Alexandra Spiegel — June 20, 2014
The Californian premium denim label AG announces supermodel Daria Werbowy as their new face for the upcoming four seasons. The model with Ukrainian and Canadian roots is known for her versatile looks and works for several luxury fashion labels. Next to her, male model Mathias Lauridsen will be acquired for the fall/winter 2014 campaign.

“We have thought about the campaign face for about over two years, the list was short and on top was Daria. She is not just remarkably beautiful, at the same time she embodies strength and confidence – attributes which stand for AG”, adds Samuel Ku, AG Creative Director.

The fall/winter 2014 campaign was photographed by Josh Olins in Montauk, New York. Responsible for the styling was Alastair McKimm and the production was conducted by Berger & Wild.

AG Jeans, launched by Yul Ku in 2000, has its headquarter in South Gate, USA. In 2008, Samuel Ku took over the role as Creative Director. The brand combines modern design with social and environmental consciousness.