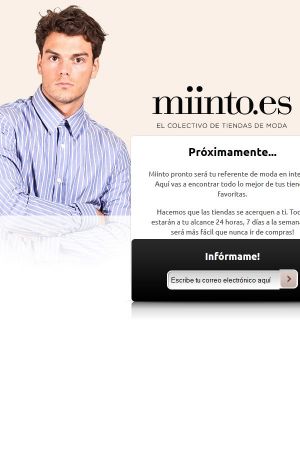 Miinto will expand in Spain
Stories

Danish Miinto.com to expand to Spain

by Melanie Gropler — March 22, 2013
Danish online shopping platform Miinto group has announced to expand its international market by launching its own domain www.Miinto.es in Spain this April.

Founded back in 2009, Miinto is an online platform that offers boutiques and stores the possibility of online selling without having to own a physical shop. This concept offers boutiques a new channel to sell their products and thereby helps them to reach a wider audience, and increase sales opportunities. The whole process, online techniques is operated and served by Miinto. Within one year the platform attracted with its concept up to 100 boutiques in its home market. Currently Miinto has opened in six other countries, Norway, Sweden, UK, Ireland, Holland and, now, Spain.

Presently, Miinto have closed agreements with Diesel, representing their 6 flagship stores in Spain, and also with prestigious stores including Yube, Double AA, Garcia Madríd, Timberland, Clarks and True Religion. To date, Miinto.es has already reached agreements with more than 50 stores.

The Miinto group expect to achieve an equally high performance in the Spanish market. These boutiques join other European shops that have already partnered with Miinto such as Fred Perry, Ted Baker, Diesel, Moschino, Paul Smith, Vivienne Westwood and Nike. The Miinto group currently works with 2,200 stores, 38,000 brands and offers more than 200,000 products across the online portal that serves the independent boutiques.

Morten Larsen, Miinto Group CEO, comments "Miinto gives fashion businesses the opportunity to compete in the digital world. We have the perfect combination between the experience of the boutiques in fashion and our experience in marketing and internet to enrich the online fashion market with a different and renewed offer.”

Many boutiques do not have an online portal because of the large investment required in both time and money along with their lack of experience and resources. Miinto tackles this issue head on, offering a solution by taking care of getting the shop operative online through photographing all products professionally, uploading these photos to the site, preparing brand descriptions and managing logistics and marketing. Miinto also helps boutiques that already have online outlets to reach more consumers through their marketing and advertising strategies.

Without having to devote significant amounts of extra time, boutiques are finding that their number of customers increases significantly and that they are in a position to compete with the big retail chains online. The arrival of Miinto in other markets has always been positively welcomed because of the facilities and advantages it offers to the individual boutiques. Expectations that the concept will be just as successful in Spain are high.

From raw material to clothing and back: Pyua x Sympatex