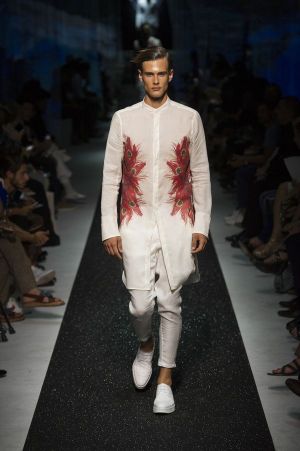 Fujian Septwolves Industrial Co Group has just opened a temporary showroom in Milan, in Corso Genova 7. It participated in the last edition of Pitti Uomo, held in Florence in June 2015, with its younger brand Swolves and presented its upmarket brand Septwolves within a fashion show held during Milan Menswear Week on 21 June. It also recently launched a new project in collaboration with Tencent, China's largest and most used internet service portal.

The group was founded in 1990 as a specialized jacket manufacturer. It later grew to offer complete men’s wardrobes and became renowned as the “king of jacket” in China for its careful manufacturing and advanced production techniques. Its Septwolves brand was awarded many times and also won the recognition as the most influential casualwear brand in China.

Fujian Septwolves is a public company listed on the Shenzhen stock market exchange since 2004. It registers €450 million (about 3.5 billion RMB) sales yearly and a net income of €75 million. They own 4,000 monobrand stores spread all over China and also sell via e-commerce which represents 5% of their sales.

“Our aim is to sell our brands worldwide participating in the Italian fashion events held within the days of Milan Expo 2015,” commented Zhou Shaoxing, founder and president of Septwolves. “We also want to sign partnerships with Italian and European companies. For instance, we can support Italian designer brands willing to expand to China. We have already managed such strategies for top brands such as Canali and Versace and we can support more, including young designers.”

The group owns three R&D centers in Shanghai, Tokyo and Hong Kong. Their creative studio is based in Milan and managed by art director Colin Jiang who studied at Milan’s Istituto Marangoni and previously worked for Roberto Cavalli. He manages a team of ten designers – eight out of them are Chinese and two are Italian.

Their younger line Swolves includes about 45 men total looks, 12 women’s total looks and a small selection of denim items. Its average retail prices range between €140 for a t-shirt and about €200 for a jacket, employing top quality materials and about 10% Italian fabrics.