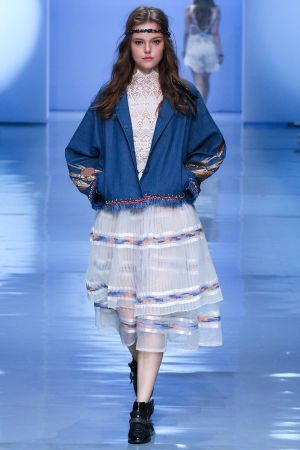 by Maria Cristina Pavarini — February 22, 2016
White Milano is warming up its engines for its upcoming edition to be held in Milan’s Tortona area from 27 to 29 February, 2016. The show will host a total of 500 brands, out of whose 142 are from foreign markets.

A special focus for this edition will be their new “China Calling” project, held in collaboration with the Chinese talent scout and opinion leader Sonja Long Xiao, founder of Alter, a highly important showroom and concept store in Shanghai.

The new project will be hosted at Superstudio in Via Tortona 27 and will present 15 of the most interesting Chinese contemporary designers including Chrisou By Dan, Shushu/Tong, Nicole Zhang, Chen YiYuan, Yvmin, C.J. Yao and Rolling Acid. “Chinese designers are struggling in order to earn their place on the international fashion map as ‘designed in China’ brands that are no longer made in China,” commented Sonja Xiao.

As special guest designer White will also host Korean designer Yohanix, who studied at London College of Fashion and worked for Balmain, launching his own brand in 2009. Yohanix likes to play with silhouettes, fabrics and material strata and further experiments with new techniques by creating hammered leathers, new prints and golden embroideries. His show will be held on 29 February, 2016.

The Special Project of this edition will be Finnish designer brand Aalto, a brand created by Tuomas Merikoski, who likes to add menswear details to his women’s collection playing with silhouettes and proportions inspired by Nordic design.

In order to support young Southern Italian designers, they are launching It’s Time to South, presenting 15 young upcoming designers from Southern Italy, a region known for its great fashion tradition.

The salon will occupy a total of 18,000 sq. meters subdivided into three different locations – Tortona 27, Tortona 54 and Tortona 35 Nhow Hotel. They expect to recall about 20,000 visitors, including 17,000 buyers. The show’s “12specialarea” will host a series of brands including Opening Ceremony, House of Holland, Toga Pulla and Swear Holland. Their Basement section, always hosting highly innovative brands, will also show Barbara Alan, who designs her sculpture-like clothes in London and manufactures them in Italy employing most advanced techniques in cutting, pattern making and construction.