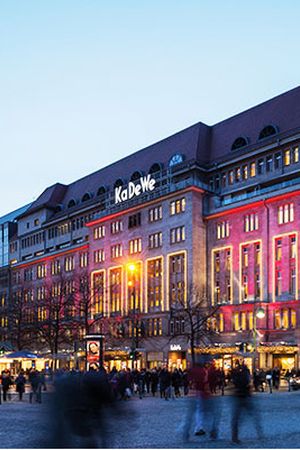 The KaDeWe in Berlin
Stories

by Maria Cristina Pavarini — June 09, 2015
Rinascente, part of Thailand’s Central Group, one of the world’s largest department store operators, has acquired 50.1% of three premium department stores in Germany - The KaDeWe, Oberpollinger, and Alsterhaus. The remaining 49.9 % quota will remain in possession of Signa Retail, retail group owning a number of independent German department store chains, including, in addition to The KaDeWe Group, also Karstadt Sports and Karstadt Warenhaus GmbH.

Major aim of this strategic partnership is to become Europe’s leader in marketing, knowhow, and innovation in the premium segment – and grow even further. New locations in Vienna and Prague are now being planned as part of the new partnership.

Tos Chirathivat, chief executive officer of Central Group, commented on the transaction: “We are extremely pleased to join forces with Signa, who is a retail and real estate expert. This will help to strengthen our presence in Europe. As a Thai company, we are very proud to have the opportunity to acquire and develop three of the best department stores in Germany. With regards to our future plan, Central Group will manage and establish strategies for The KaDeWe Group. We expect to use our retail experience to strengthen each department store, while preserving the history and the heritage of the three department stores.”

Wolfram Keil, Managing Director of Signa Retail, commented: “Our strategy is sustained development – and growth with real quality”, and continues: “That’s why we are bringing together the top figures of the entire continent in the premium segment. It’s a major achievement on our way to being an integrated department store group in Europe.”

Vittorio Radice, Vice-Chairman of La Rinascente in Italy and Illum in Denmark commented: “We are very impressed by the quality and experience of the trading activities of Signa. Moreover, the three department stores of The KaDeWe Group are true jewels and will benefit significantly from the synergy effects and exchange of knowhow from this partnership. We are going to be the market leader in Europe.”
This acquisition will serve as a significant addition to Central Group’s continuing expansion in Europe. Today, La Rianscente and Illum together enjoy annual sales of approximately 600€ million, which is expected to increase to 1.2€ billion through the addition of the three department stores in Germany. In order to become one of the global leaders in premium and luxury department stores, Central Group will continue to acquire additional department stores with strong potential in important European cities.”

Central Group has been present in Europe since 2011 when it acquired the Italian department store group La Rinascente with the intention to develop a European collection of historic luxury department stores. Since then, it has continued the repositioning of the La Rinascente flagship store in Milan and in the other 10 stores around Italy, and there is a plan to introduce a new branch in Rome in February 2017.
In 2013, it also acquired Illum, the oldest department store in Denmark and started a 5-year repositioning program. The renovation is expected to be completed in 2018.

The acquisition of The KaDeWe Group will propel Central Group to become the leader of premium and luxury department stores in Europe and Asia, with seven extravagant iconic flagship stores (La Rinascente Milan, La Rinascente Rome, Illum Copenhagen, The KaDeWe Berlin, Oberpollinger Munich, Alsterhaus Hamburg, Central Chidlom, and Central Embassy in Bangkok). Each of the seven department stores is a landmark of the city where it is located in.