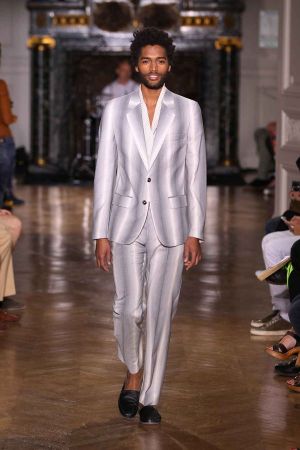 by Barbara Markert — July 03, 2012
The Paris menswear fashion week went cool and sporty for the spring/summer 2013 season and came to a close yesterday evening after five well-charged days with a theatrical show from Thom Browne, who showed his collection in a garden atmosphere. The collection itself was about tailoring and was made up of different checkered fabrics with couture finishes. Riccardo Tisci also showed a sophisticated collection that played with luxury materials such as silk organza, printed jacquards with silk layers and exclusive prints on shirts and suits featuring an image of Jesus and the Madonna.

Sportswear and technical fabrics for athletic-wear were a big theme for next summer. Louis Vuitton, which will celebrate ten years of partnership with the America’s Cup next summer, designed its whole collection around sailing and watersports. Even the avant-garde designer Rick Owens showed sporty rain coats while Issey Miyake put his models on bicycles and Viktor & Rolf paired sneakers with classic suits and tuxedos. Kris van Assche took the elastic waistband concept from jogging pants and transferred it to urban trousers with a clean collection that showed a multitude of tops and trousers in pure white, an abundance of which was also seen at 3.1. Phillip Lim, Maison Martin Margiela, Damir Doma, Lanvin and Boris Bidjan Saberi. 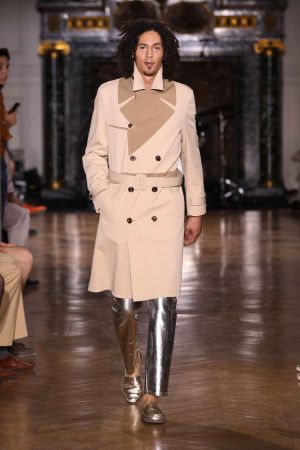 Maison Martin Margiela
White dominated the collections, as did yellows, red-oranges, soft blues, petrol shades and variations of beige. Another big trend was camouflage and flower prints for tops and bottoms. Comme des Garcons, Kenzo, Dries van Noten, Wooyoungmi, Ann Demeulemeester and 3.1. Phillip Lim showed sumptuously worked fabrics that echoed the feminine fashion trends of 2013. Another womenswear trend, neon, was also featured in menswear as seen in accessories for Louis Vuitton and Hermès. Checks and stripes, another big theme in Milan, were displayed on suits and trousers by Acne and Paul Smith.

Suits followed the casual movements of the season, with pants in looser fits and jackets without linings. Rick Owens, Hermès, Christian Dior and Walter van Beirendonck chose translucent materials to underline their tailoring, which was followed by layered looks that were present at nearly every collection in Paris.