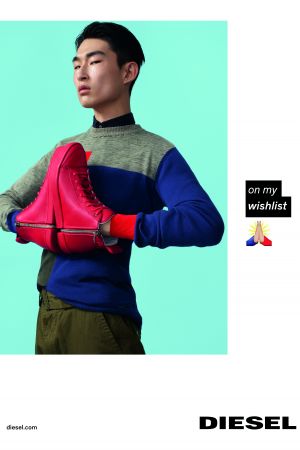 “Our worlds, online and offline, are completely merged. Digital is now more real than reality. Emojis have become the new Esperanto, a universal language which is understood by millions,” says Diesel Artistic Director Nicola Formichetti. And that’s why Italian brand Diesel decided to go down a route with their new spring/summer ’16 campaign that no other brand has gone before.

For the spring/summer ’16 campaign, Diesel also releases their own emoji alphabet, used throughout the campaign and completed through #slogans to show the absurdity of today’s social media culture.

On top, the campaign features young influencers such as singer and actor Joe Jonas and his band DNCE as well as designer Kiko Mizuhara, with DNCE advertising the campaign on their own social media channel. The cast of models includes young newcomer models such as Stav Strashko, a male that identifies as a girl and is present on the women’s boar of his agency. This way, Diesel wants to bring together different cultures, individuals and personalities one can find online.