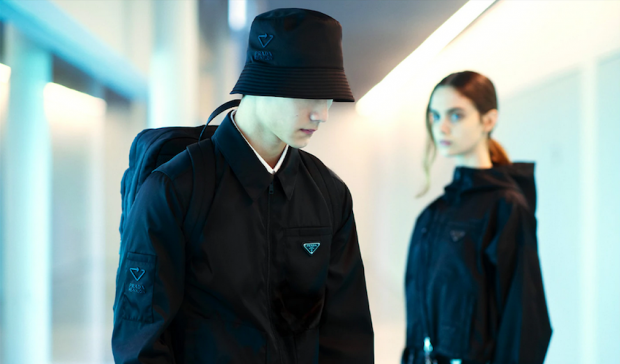 Prada: Why it's all about attitude and culture

Behaving sustainably is a lifestyle attitude and a form of culture all are urged to join. The youngest generations, in particular, need to consolidate such a consciousness as a key responsibility for the future of the planet and humanity. For these reasons Prada Group is involved in a series of initiatives following this path.

Among its most recent ones, it has launched “Sea Beyond,” an educational program dedicated to sustainability and circular economy aimed at secondary schools around the world. The campaign originates from a partnership with UNESCO’s Intergovernmental Oceanographic Commission, and aims to educate and raise awareness among the new generation about adopting more a responsible and mindful behavior towards the ocean and its resources, and promoting an attitude of sustainable consumption in line with the United Nations 2030 Agenda and its 17 Sustainable Development Goals (SDGs). 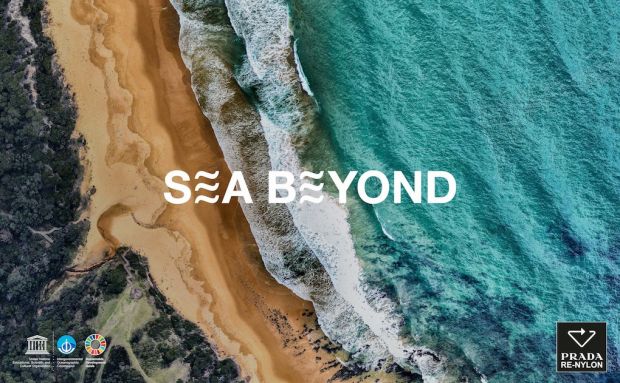 Photo: Prada
Prada and UNESCO Sea Beyond project, campaign image
The project was announced at the end of January. Students are asked to develop a sensitization campaign focused on the preserving of oceans and will be awarded during a virtual event to be held on 26 March. An international jury will announce the winner: Lorenzo Bertelli, Prada Group head of corporate social responsibility and Vladimir Ryabinin, executive secretary of the Intergovernmental Oceanographic Commission and assistant director general of UNESCO, will be joined by international personalities including Italian writer Alessandro Baricco, aquanaut and oceanographic explorer Fabien Cousteau, environmental artist Anne de Carbuccia, marine scientist and social entrepreneur Kerstin Forsberg and Italian gold-medalist free diver Alessia Zecchini. The jury will help Prada and UNESCO selecting the most creative project.


Caring for the oceans with a project and a product
The initiative follows the launch of the Prada Re-Nylon capsule collection made with a recycled nylon and aims to underline Prada Group’s commitment in terms of sustainable choices and impact on the oceans that it launched several years ago.

Re-Nylon is a capsule collection made of Econyl, a recycled nylon fiber by Aquafil that comes from recycled materials such as fishing nets, fabric scraps, carpet flooring and industrial plastic from landfill and oceans. “Nylon is an iconic fiber for Prada, a fusion of heritage, present and future. The idea of this capsule originates from handbags, backpacks and travel bags in Econyl,” said Lorenzo Bertelli. “We are proud we have created an ocean awareness project from what was initially a product innovation and a sustainable materials initiative that sets our commitment to the United Nations’ Sustainable Development Goals Life.” 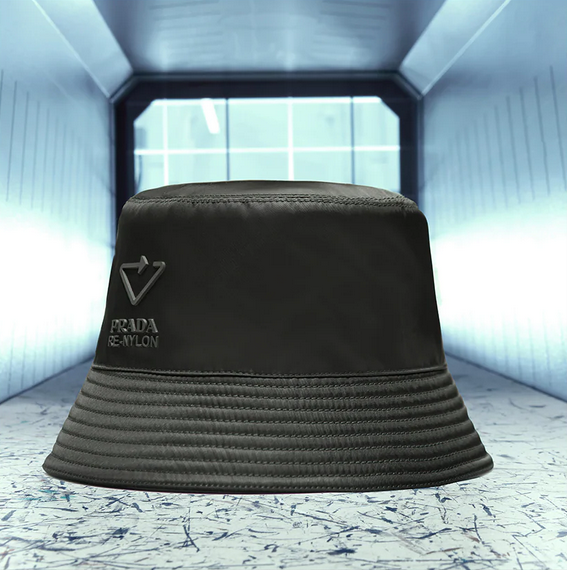 Photo: Prada
Hat of the Prada Re-Nylon line
Prada Re-Nylon debuted in 2019 with a capsule bag collection of six classic styles for men and women. In 2020 the collection expanded and started including ready-to-wear made with nylon gabardine and nylon Piuma, footwear, offering re-editions of the Monolith combat boots and shoes, low- and high-top sneakers, hats, belts and multiple bag silhouettes for men and women, along with an archival Re-Edition style drawn from 2000.

The company has more ambitious sustainable targets based upon this sustainable capsule: “Our ultimate goal will be to convert all Prada virgin nylon into Re-Nylon by the end of 2021. This project highlights our continued efforts towards promoting a responsible business. This collection allows us to make our contribution and create products without using new resources,” Bertelli says. 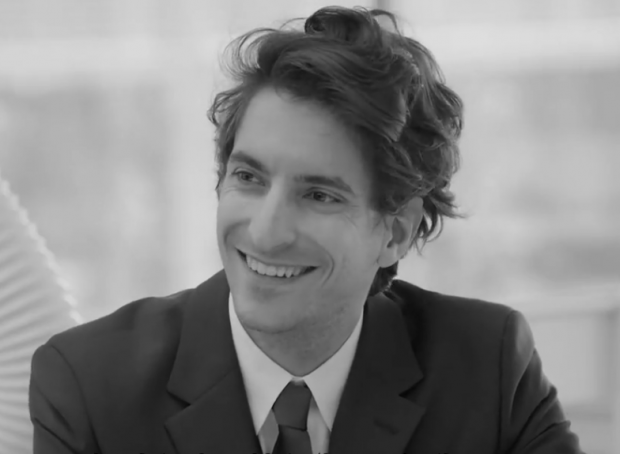 Photo: Prada
Lorenzo Bertelli, head of marketing and CSR, Prada Group
Culture is the only way
Along with this newly released project, Prada Group believes in the importance to focus on sustainability as a cultural and founding aspect for the group. This has been the company’s strategy for several years.

Miuccia Prada, owner and designer of the Italian pret-à-porter brand said: “Culture shouldn’t be something you have or want to do for looking more clever or intelligent but is something that is needed for your life. Culture is what makes understand the current times. You realize that what is really missing in not another art exhibition. You have to understand deeply what does it mean not being sustainable. Culture is the only way.” 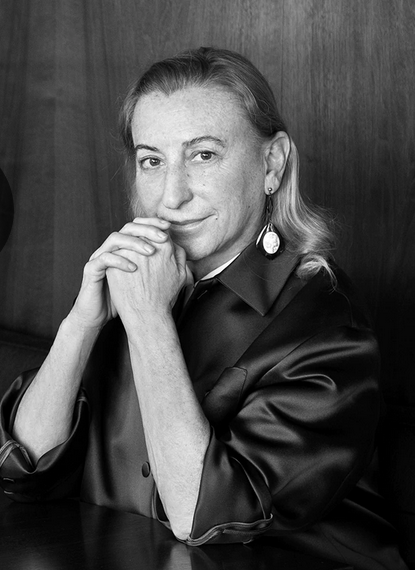 Photo: Prada
Miuccia Prada, co-owner/creative director, Prada
Aims and investments
Prada’s sustainable strategies also coincide with investments. The group recently obtained a €90 million sustainability linked loan by Unicredit bank within a five-year time to better achieve its industrial goals such as the aim to integrate its industrial presence within the local community, developing new sustainable materials, regenerating and reconverting production waste, and reducing the impact on the environment by producing its own energy.

“In recent years Prada has taken different strategies in order to significantly reduce its energy consumption such as the construction of ten voltaic systems positioned on the roofs of our industrial sites, the use of state-of-the-art air conditioning system, and–only achieved last year–100% of the energy we consume on the Italian soil comes from renewable sources,” explained Bertelli.


Restoring, not demolishing
The group owns 19 factories in Italy and every time it generally opts for respecting and restoring the original sites to avoid creating imbalances in its surroundings. For instance, its company’s factory in Valvigna was refreshed into a garden-factory by transforming the pre-existing building instead of demolishing it. 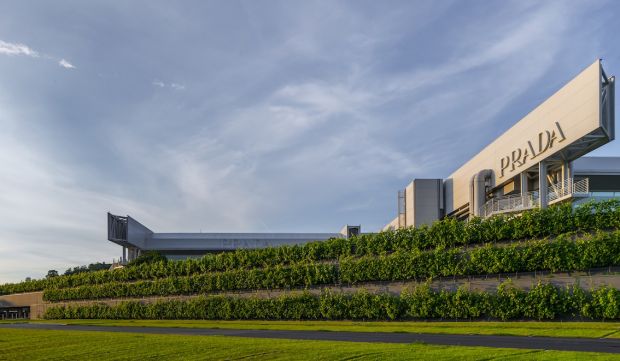 Photo: Alessandro Ciampi
Prada's factory in Valvigna
Recycling at all costs
With the ambition to lower its impact Prada Group has also started repurposing furnishing used for its shows. The materials utilized in the set of the Prada fall/winter 2021 menswear digital show will be upcycled, finding a new life after the event through product installations and pop-ups around the world. These materials were donated to Meta, a circular economy project based in Milan, which offers sustainable solutions to waste disposal by collecting and recovering materials for selling and rentals. Meta works in collaboration with La Réserve Des Arts, an association offering a service of collection and recovery of raw materials and decoration waste from fashion shows, making them available to professionals and students in the cultural sector. 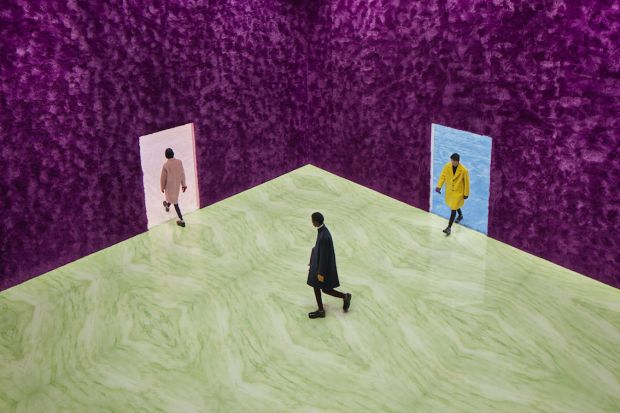 Photo: Prada
Prada f/w '21 menswear show: All decors of the fashion show materials were reused or donated to Meta, a circular economy project based in Milan.
Fashion with a purpose
On the product side, the group has started following a series of different initiatives by adhering a fur-free policy. Starting for s/s 2020 women’s collection, the Group is no longer using animal furs for creating new products, though it will continue selling leather and other products that are considered to be a byproduct of the meat trade like, for instance, sheepskin and calfskin. The inventory will be sold until quantities will be exhausted. In collaboration with the Fur Free Alliance (FFA), a coalition of more than 50 animal protection organizations from more than 40 countries, the Prada Group announcement continues a positive dialogue with FFA members, LAV and The Humane Society of the United States.

Miu Miu, another brand of the group, launched Upcycled by Miu Miu, a collection of recycled vintage pieces re-elaborated by Miu Miu. It is made up of non-signed period items from between the 1930s and the 1980s, accurately selected in vintage stores and flea markets from all over the world. The collection presently includes 80 single numbered pieces.


More goals to achieve
In 2019 Prada Group also adhered to the Fashion Pact, which aims to safeguard the planet according to three main aspects: stop global warming by reaching zero greenhouse gases emissions by 2050, in order to keep the global warming below 1.5°C, between now and 2100; restore biodiversity by achieving objectives that use Science-Based Targets to restore natural ecosystems and protect species; and protect the oceans by reducing the fashion industry’s negative impact on the world’s oceans through practical initiatives, such as, for instance, gradually removing the usage of single-use plastics. 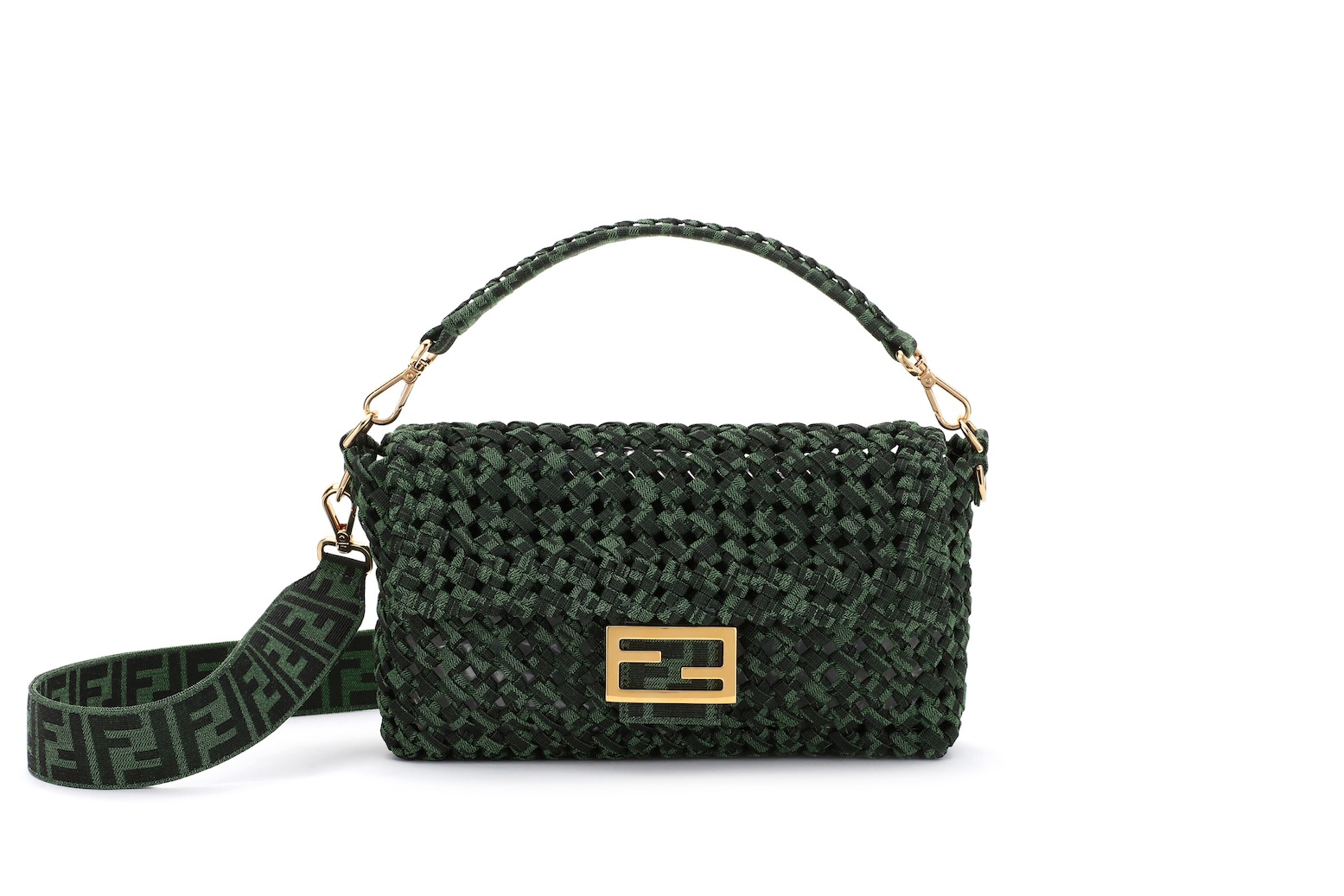 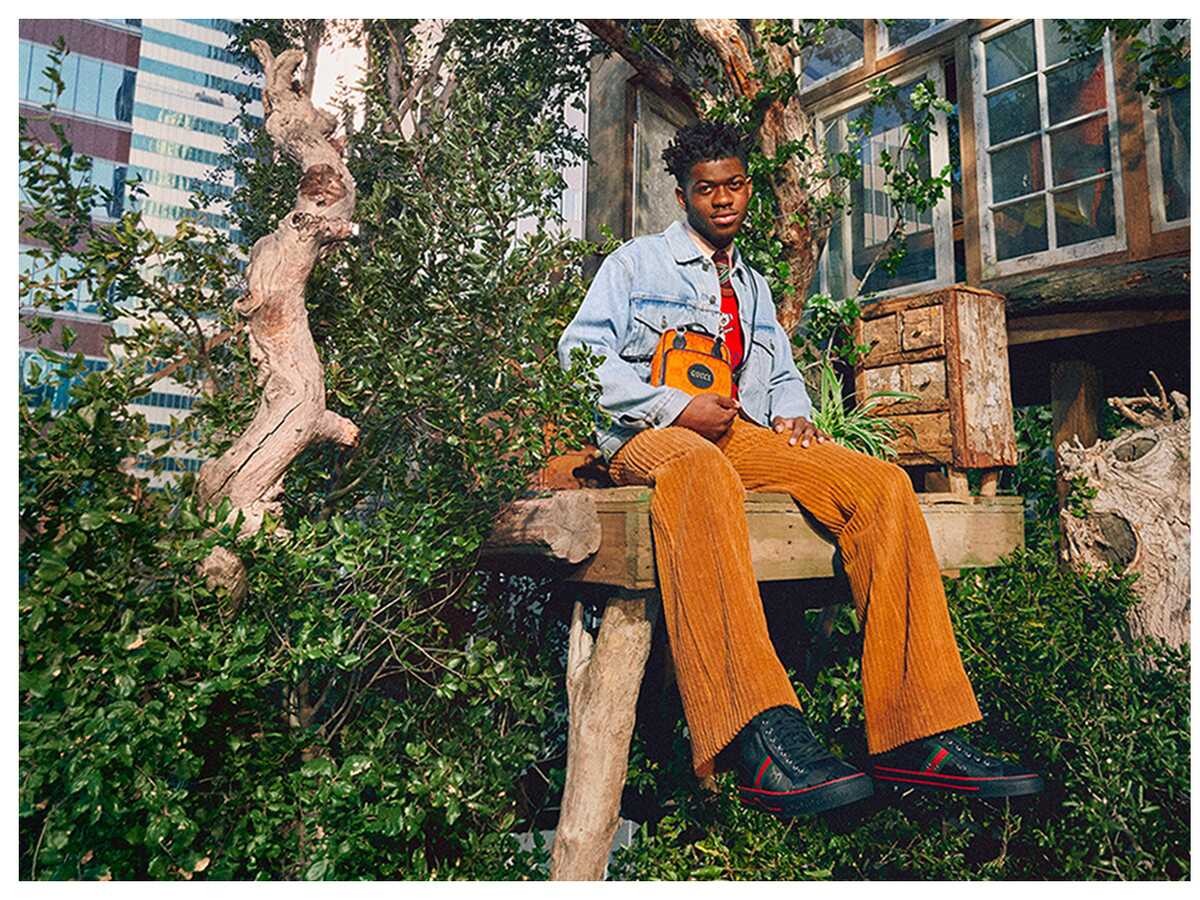 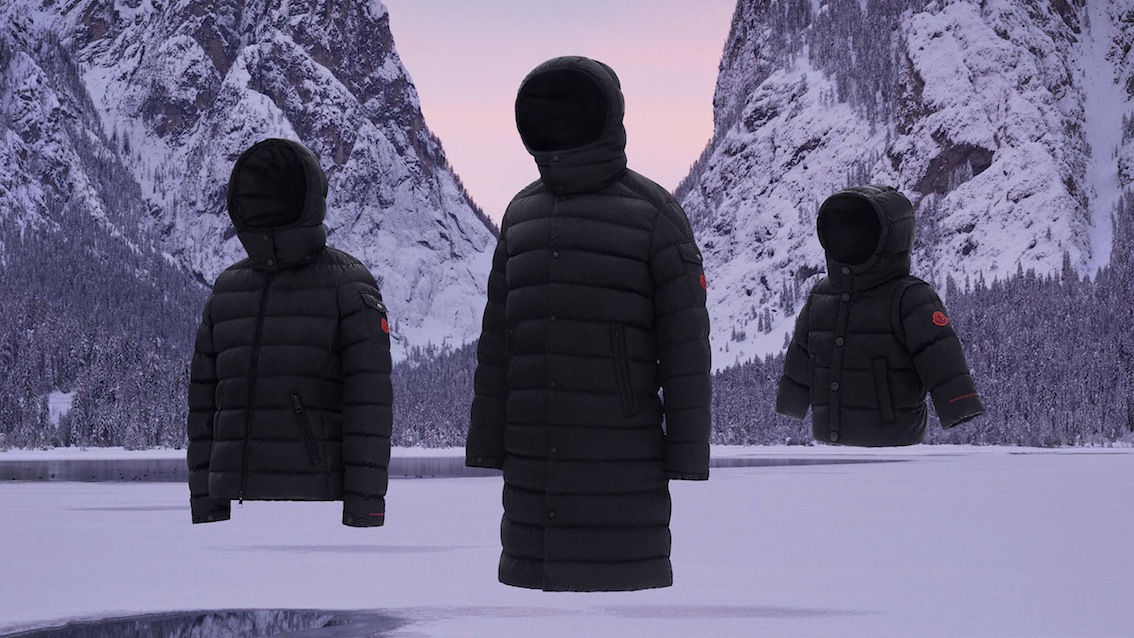