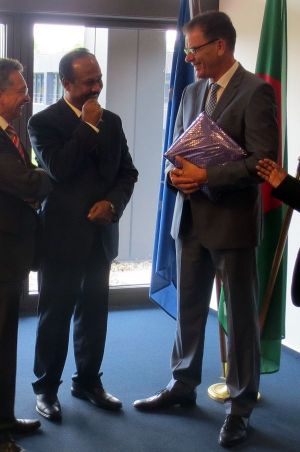 Commerce Secretary Mahbub Ahmed, Labour Secretary Mikail Shipar and other senior officials from the Commerce and Labour Ministries of Bangladesh also met the German Minister as part of a five-day study tour to the European country which will end June 20.
The tour is organized by the ‘Promotion of Social and Environmental Standards in the Industry’, a joint project of the governments of Bangladesh and Germany, implemented by Deutsche Gesellschaft für Internationale Zusammenarbeit (GIZ) on behalf of BMZ.
A focus point of the study tour is the dual vocational system, widely popular in Germany, which combines theoretical and practical training, with the objective to evaluate its adaptability in Bangladesh.

The officials from both countries discussed social and environmental standards in the garment and textile industry in Bangladesh and joint projects in the context of German development cooperation.
Initiatives taken by the government of Bangladesh after the Rana Plaza building collapse last year to improve the safety and working conditions of garment workers were also discussed, a GIZ spokesperson told a SPORTSWEAR INTERNATIONAL correspondent in Dhaka.