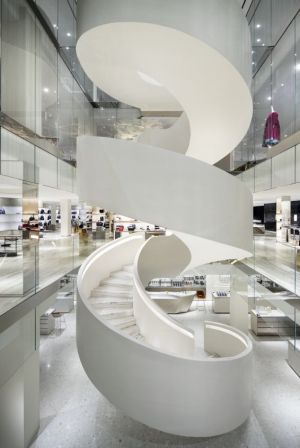 by Christopher Blomquist — February 16, 2016
Luxury multibrand retailer Barneys New York opened its new downtown flagship store in Chelsea yesterday and the 55,000-sq.-foot (5,110-sq.-meter), five-level space is a stunner. Located on Seventh Ave between 16th and 17th Streets, the store stands on the same block where it was founded by Barney Pressman in 1923 and where it housed its flagship location until it moved its primary site to Madison Ave in the ’90s.
Designed by Steven Harris Architects, the store, which carries high-end women’s and men’s RTW, accessories, footwear and cosmetics is a pared down, edited version of the uptown flagship both size-wise and product-wise. 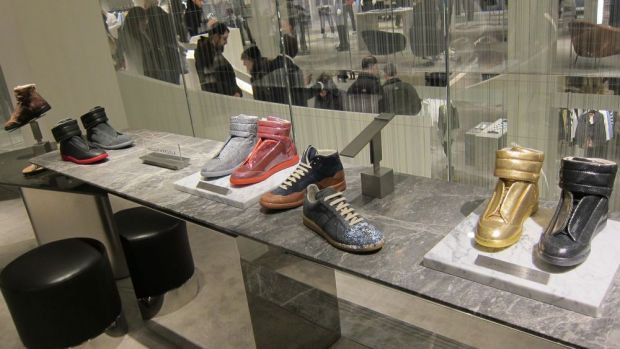 Men's shoes at the new Barneys
Oozing streamlined luxury, the space features a white cement and marble spiral staircase at its center. Encased in a glass atrium that offers views of and access to each floor, the stairs run from the basement to the third floor; their smooth curves are reminiscent of New York’s iconic Guggenheim Museum noted one delighted first-day customer yesterday. (Elevators in the back of the store are also available). 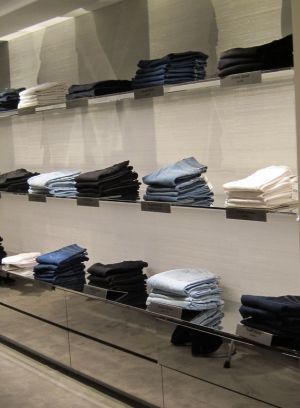 The denim area
The lower-most level is home to cosmetics, skincare, fragrances, men’s grooming and also has a Blind Barber barbershop. The ground level offers women’s and men’s leather accessories and women’s jewelry. Women’s RTW and shoes (including a small denim area stocked with brands such as Frame) are on the floor above while the men’s department – chock full of designerwear and luxury shoe and sneaker offerings – is on the third floor, along with a branch of the restaurant Freds. The top floor is home to personal shopping suites.
The exterior is also extremely eye-catching thanks to a modern, sculptural stainless steel marquee that runs along the storefront and curves around the corner on 16th Street and a current display of short films shot by Bruce Weber called “Our Town” in the store’s expansive front windows.
"The opening of our new Downtown flagship is a unique homecoming for Barneys New York," says Barneys New York CEO Mark Lee in a statement. "Born as a single brick and mortar location over 90 years ago, Barneys New York returns to the same New York City block as a modern 21st century retail force that will offer the downtown customer a unique and unprecedented customer experience."

At noon yesterday the new store already had steady traffic and plenty of curious downtown shoppers eager to see Barneys return to Chelsea. After offering assistance, the store’s friendly salespeople’s next question was inevitably “Do you live or work in this area?” – a clear sign that this new Barneys has been tailor-made for the increasingly wealthy downtown crowd. 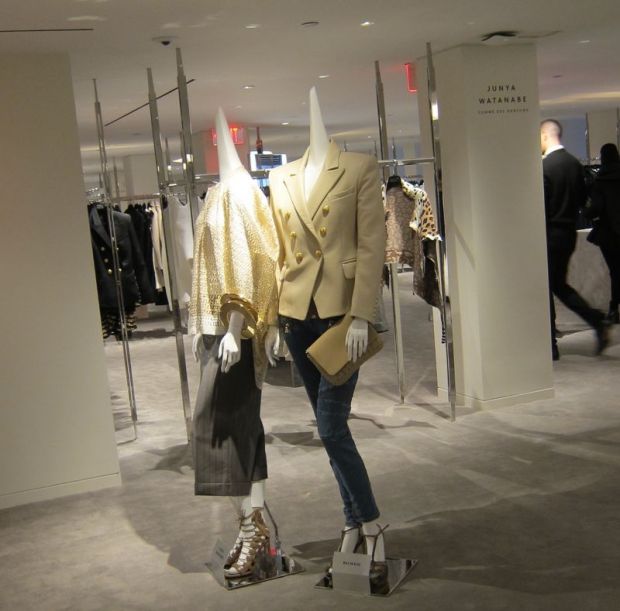 Display on the second floor