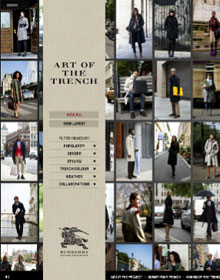 — November 18, 2009
Launched on Nov. 9, Artofthetrench.com is the new social media platform by Burberry. Designed as an ever-evolving celebration of the classic Burberry trench coat, the site is set to feature regular collaborations to give new visual representation to trench coat culture across the globe. For the launch of the site, Christopher Bailey commissioned Scott Shuman of The Sartorialist to photograph trench coat wearing folks in cities including London, Milan, New York, Berlin and Sao Paolo.


Aside from ongoing partnerships with noted creatives, individual site users are invited to submit their own images to add a personal touch to the site and different aspects of trench coat styling from across the globe.


In the same week as the debut of Artofthetrench.com, Burberry CEO Angela Ahrendts appointed Christopher Bailey to the newly created position of Chief Creative Officer of Burberry. Bailey’s promotion was made in recognition of his notable contribution to the brand since his appointment as Burberry Creative Director in 2001.