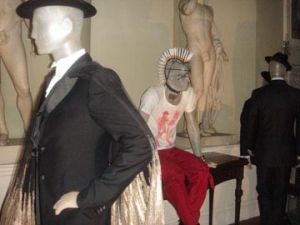 — May 12, 2006
Leaders and luminaries of the fashion world were in full attendance for the launch of the fashion exhibition “Anglomania: Tradition and Transgression” at the Metropolitan Museum of Art (metmuseum.org) here last week. Unsurprisingly, plenty of British players showed their faces for a preview of what has become one of the museum’s most crowd-pulling exhibitions to date.

Organized by Andrew Bolton, the Met’s costume institute's associate curator, with support from Harold Koda, its curator in charge, and the decorative arts curators Ian Wardropper and Daniëlle O. Kisluk-Grosheide, the exhibition is a lavish riot of fashion in the form of 65 well-attired mannequins.

Through the fashion lens, “Anglomania” considers aspects of English/British culture such as class, eccentricity, royalty and pageantry that have all fueled the imaginations of the creative industries. Moreover, it pays homage to a defining era of culture and fashion, and perfectly executes the Brits’ diverging relationship between their inherent imperialism and sardonic nonconformity, laying bare the romantic construct of “Englishness.”

Set among the English Period rooms of the museum, clothes that embody both the traditional and the transgressive are displayed alongside each other, demonstrating stark contrasts between the old and new, the liberal and conservative and, in some sense, the proletariat versus the aristocrat.

In “The English Garden” vignette, mannequins in brocade gowns from the 18th century surround a dress by Hussein Chalayan that is made from hundreds of nylon rosettes and shaped like a formal garden topiary. Each figure is finished with a Phillip Treacy “orchid” hat of silk, organza, straw and jersey with clipped ostrich plumes.

The scene entitled “The Gentlemen’s Club” (pictured above) illustrates three marked styles of British menswear. The English gentleman, a pin-up of Savile Row and suitably dressed as such, is juxtaposed with The Dandy and most conspicuously, The Punk. The positioning of a Kilgour two-piece, next to a Stella McCartney evening suit and then a shredded tartan Westwood ensemble, flaunts styles so contrasting and yet so intrinsically connected, that British eccentricity needs little more explanation.

One of the most striking displays of the exhibit is named “The Hunt.” Regarded as an upper-class activity, the British sport of fox hunting dates back to the late 15th century, and to this day partakers remain discernible by their bright scarlet riding coats, as seen on display. Here though, this “badge of Englishness” has been reinterpreted by John Galliano and Vivienne Westwood, designers both known for their appropriation and subversion of the traditional. Westwood’s 1890s-style sleeves and bustle rendered in a froth of lace frills, displays her love of spectacle and sexuality, while alongside are the Burberry trench coats with fox fur trims, which expose the grim reality of the hunt.

The eccentricity of “Anglomania” continues through the further vignettes named “Upstairs Downstairs,” “The Deathbed,” “Empire and Monarchy,” “Francomania” and “The Hunt Ball,” each with the common thread of British wit.

The unsubtle juxtaposition throughout the exhibit is a flawless representation of British attitudes, and a dichotomy between old and new expressed beautifully through the art of fashion. This is one of the grandest exhibitions of British art, culture and design ever known, and to boot, does a great job of asserting what we have always known — in fashion the present will forever draw on references from the past.

The exhibition runs through September 4, 2006.