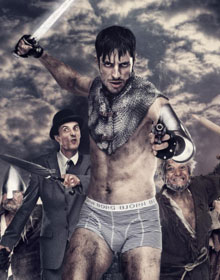 — October 24, 2008
Björn Borg, the Swedish underwear and apparel brand, is strengthening its management and hiring an experienced team to lead its continued international expansion.

Arthur Engel, former President of Gant, has been named President, while Henrik Fischer, former President of Polarn O. Pyret and Director of Operations for Gant, will be Vice President and International Sales Director, effective November 3. Current President Nils Vinberg, however, will leave his post after nearly ten years at the brand to become Vice Chairman.

“Nils Vinberg has done a fantastic job as President and has been an important driving force developing Björn Borg to a listed billion kronor company with representation on 16 markets,” said Fredrik Lövstedt, Chairman of Björn Borg, in a statement.

“We have been discussing for some time how we could strengthen our prospects of further international expansion. Now we take the next step in the development of the company and are very pleased to have hired Arthur Engel and Henrik Fischer, both providing important competence for powerful efforts going forward.”

Björn Borg has previously offered employees and management the opportunity to acquire warrants as part of a number of incentive programs. The Board of Directors intends to decide whether to call a general meeting to ratify a new incentive program for Engel and Fischer, which would give them the opportunity to acquire a total of 1,250,000 warrants, each entitling them to subscribe to a new share in Björn Borg.