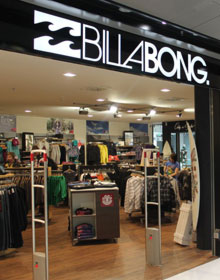 — November 25, 2009
Billabong has opened its second store in Austria, located at Innsbruck’s Sillpark Shopping Center near the city's main station. The 140-sq.-meter store is operated in partnership with the local firm Textil Rauscher GmbH, a long-term customer of the Billabong brand.

“We worked with Billabong for 10 years and watched the growing success and professionalism of the company,” said shop manager Adi Rauscher. “Especially in Innsbruck, where Billabong is a sponsor of the Air & Style snowboard event, the brand has a huge impact.”

The store presents in addition to Billabong other brands of the parent company GSM, such as Dakine, Kustom Footwear, Von Zipper eyewear and apparel, Nixon Watches), and selected items from Element and the girls’ line Element Eden.

The first Austrian Billabong store opened in Salzburg in February 2009.

For the occasion of the store opening, Billabong has invited several world renowned snowboarders. On Friday, Dec. 4 Billabong’s Antti Autti (FIN) and Risto Mattila (FIN) will give autographs. On Dec. 5, the second Billabong Air & Style snowboard event will take place at Bergisel Stadium. Sixteen pros from seven countries will form a lineup of top riders. World champion Peetu Piiroinen and the winner of the straight jump contest in 2006, Travis Rice, will compete on the highest level. Additional riders are expected from the US, Canada, Scandinavia, Germany and, for sure, Austria.