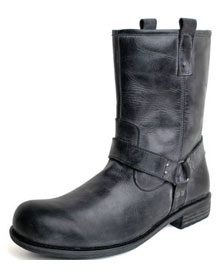 — March 23, 2010
UK-based men’s footwear brand Base London has appointed Freemark Enterprises to represent the brand’s footwear collections in Germany. Freemark Enterprises, headed up by René Loewy, who also represents Steve Madden, Keds, Manitobah and Bearpaw, will be responsible for reintroducing Base London and Fish ‘N’ Chips, Base London’s new casual fashion sub-brand, into the German market for F/W 10. Base London has repositioned areas of its product offering to bring a far more fashion-focused collection that would specifically appeal to markets in mainland Europe, and the introduction of Fish ‘N’ Chips by Base London allows the brand to appeal to a different sector of the market. “Freemark are a fantastic signing for Base London and René’s reputation amongst the footwear industry in Germany will help us develop into some great accounts,” said Mark Husted, Base London’s UK sales and business development manager. Base London was launched in 1995 after its founders spotted a void in the market for branded fashion-formal footwear for the high street. Previously consumers had the choice of wearing their own creations or exclusive designer names with nothing in between. Base London is now represented in the UK and Ireland, France, Germany, Norway and Belgium.