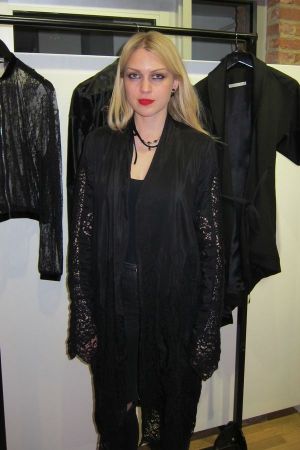 by Christopher Blomquist — March 03, 2016
After walking countless aisles and scouring through the hundreds of photos taken at the women’s f/w 2016-17 trade shows that concluded last week, here are, in alphabetical order, 20 of our favorite new– or in many cases rediscovered–brands that caught our attention for their originality and on-trend creations for the season.

Artisan De Luxe
This Los Angeles-based denim brand, which has been somewhat under the radar for a few seasons, showed an innovative collection at Capsule that included vintage-wash jeans with frayed, uneven hems at the ankle, a darky chambray top with ruffled sleeves and frayed edges and a oversized pullover sweatshirt with a wide, Flashdance-inspired neck and an asymmetric front that was also frayed along the edges. 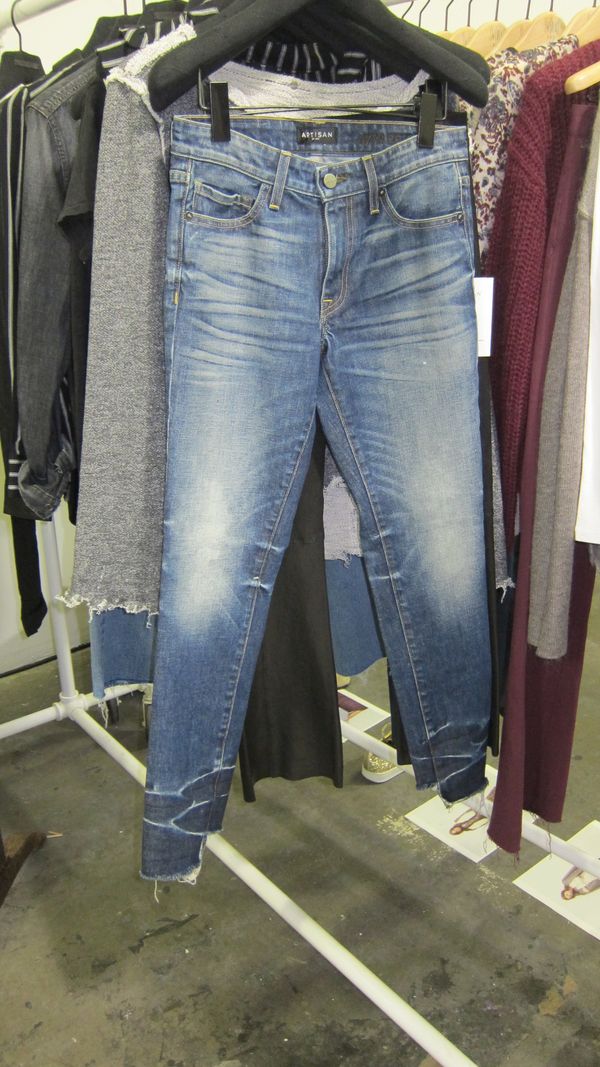 Baldwin
Designer Matt Baldwin’s men’s collection this season wowed us in January so it’s no surprise that his women’s offering, which showed at Coterie, followed suit. Anchored by jeans in earthy brown, gray and black, the line also served up a maxi-length denim skirt that supposedly Anna Wintour advised him to create. Already worn by Kendall Jenner, the skirt is the label’s bona fide seasonal hit. 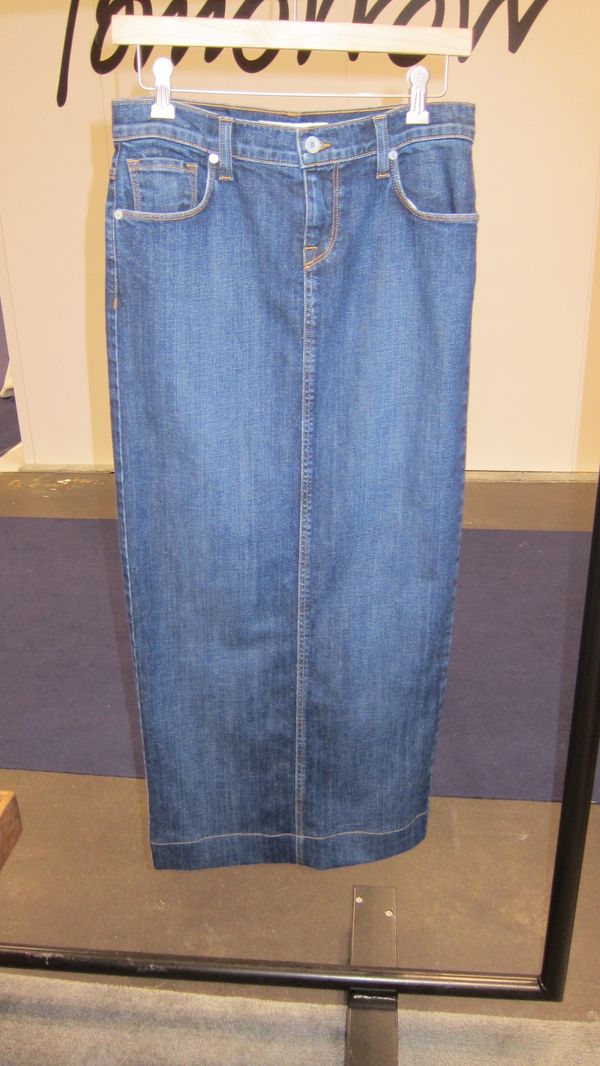 BSBEE
Although it has continued to thrive in its homeland of Italy, this somewhat boho collection known for its use of organic cotton and interesting fabrics made a welcome return to the United States at the Designers & Agents show. With plaid tops and numerous yummy chunky knits, it stood out as a true original. 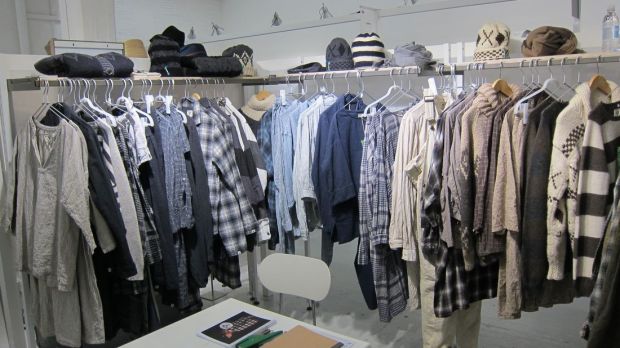 CHRLDR Noir
In addition to its main line, which stresses concert-inspired graphic tees and a capsule Olympics collection, T-shirt brand CHRLDR showed CHRLDR Noir, a great line of upscale, luxurious basics in a neutral palette that are extremely affordable for their quality, at Coterie. For example, tees in premium cotton will retail for about $70 each. 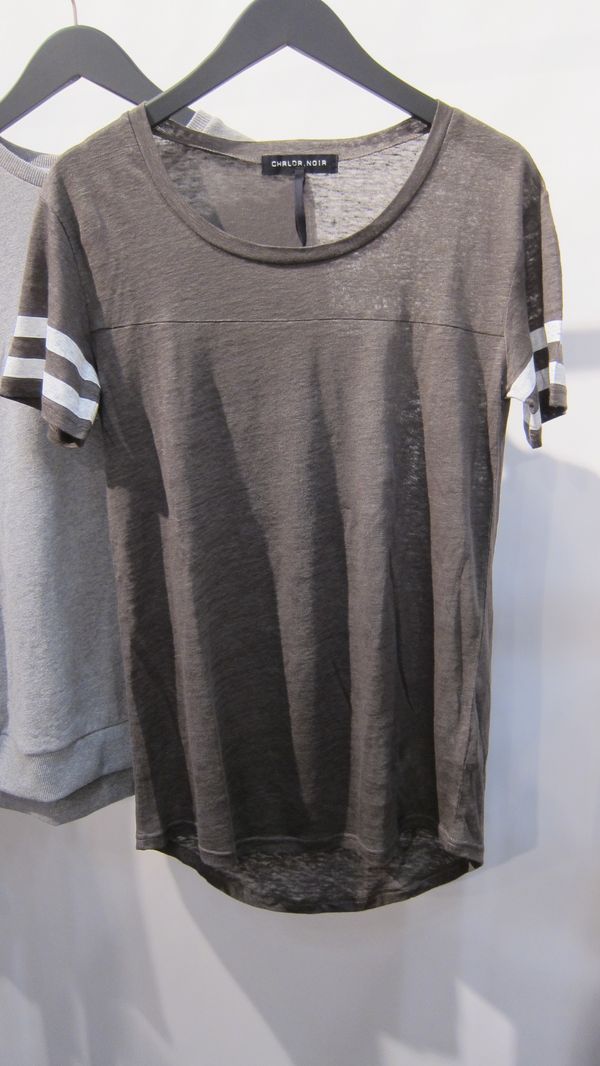 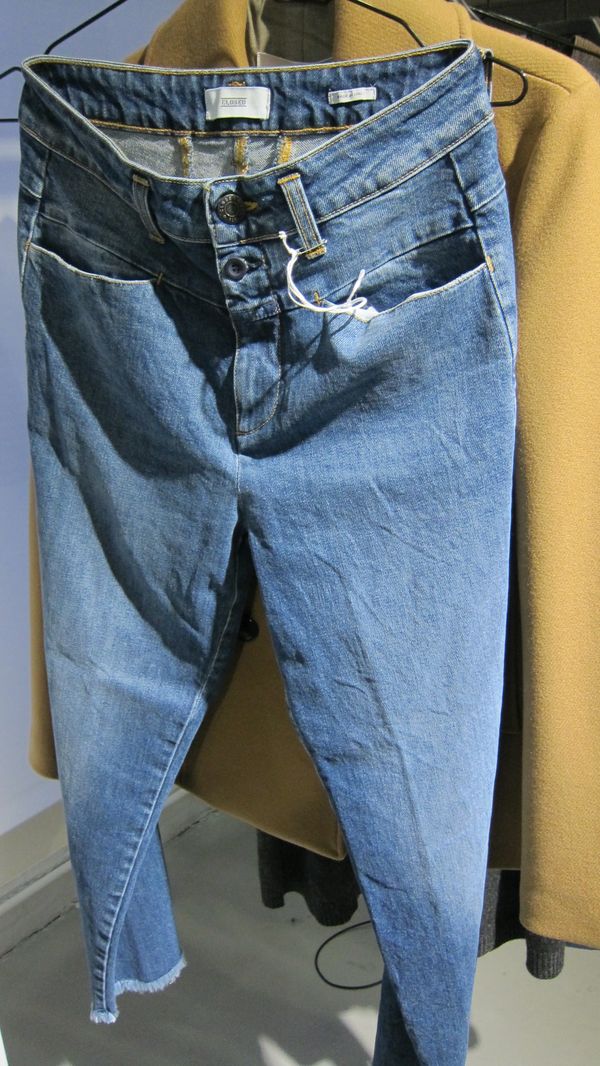 Cockpit USA
This US military-inspired outerwear brand has really stepped up its women’s offering of late, which it showed this season at Capsule. Key items include a fur-collared parka, a green snakeskin-leather cropped trench and a bomber with a Flying Tigers motif on the back. 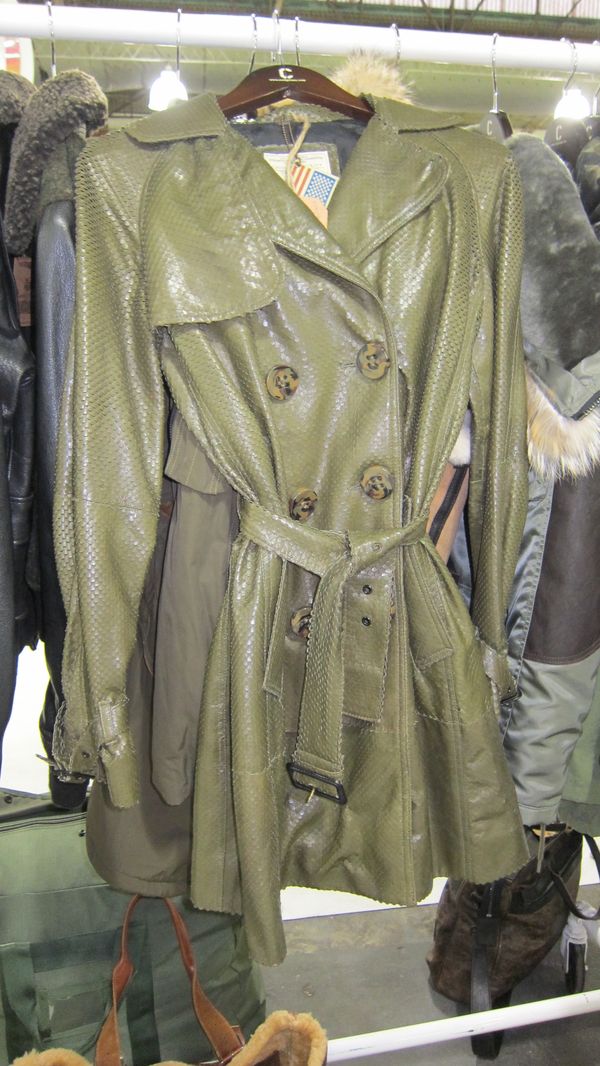 Engineered Garments
Designer Daiki Suzuki mostly just shrank his menswear offerings to create his women’s collection for fall explained the team at the brand’s both at the WOMAN show. Made with sumptuous fabrics, the designs included denim shirtdresses, street-friendly bombers and rich plaid wool outerwear. 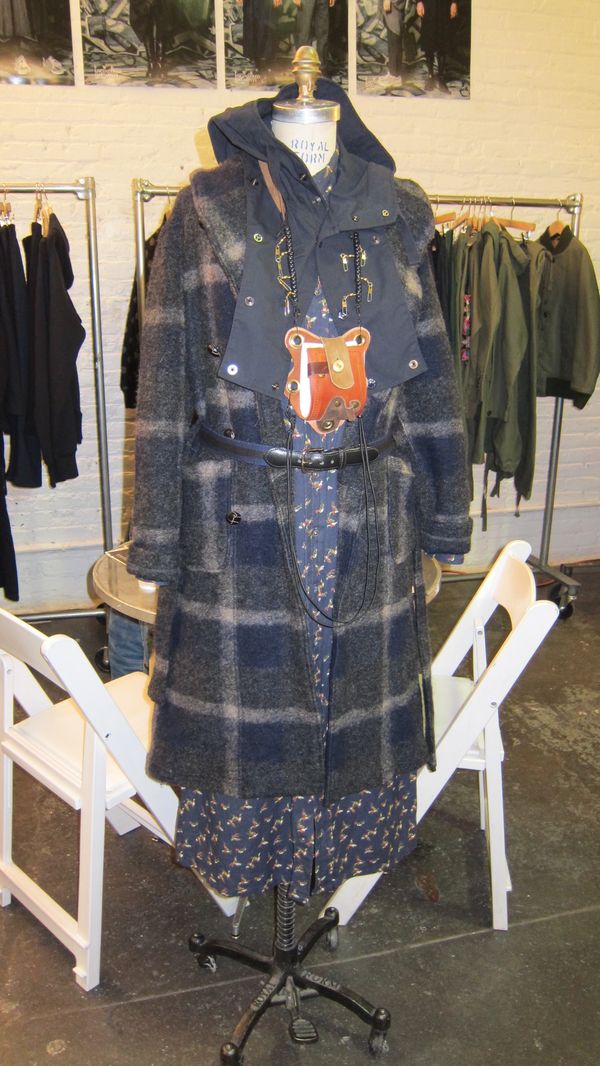 GoGo
This eye-catching line of chunky knitwear from Canada made its impressive US debut at Capsule with fresh, original sweaters such as the Snow Babe model and an all-white one with fluro pink lacing in the front. 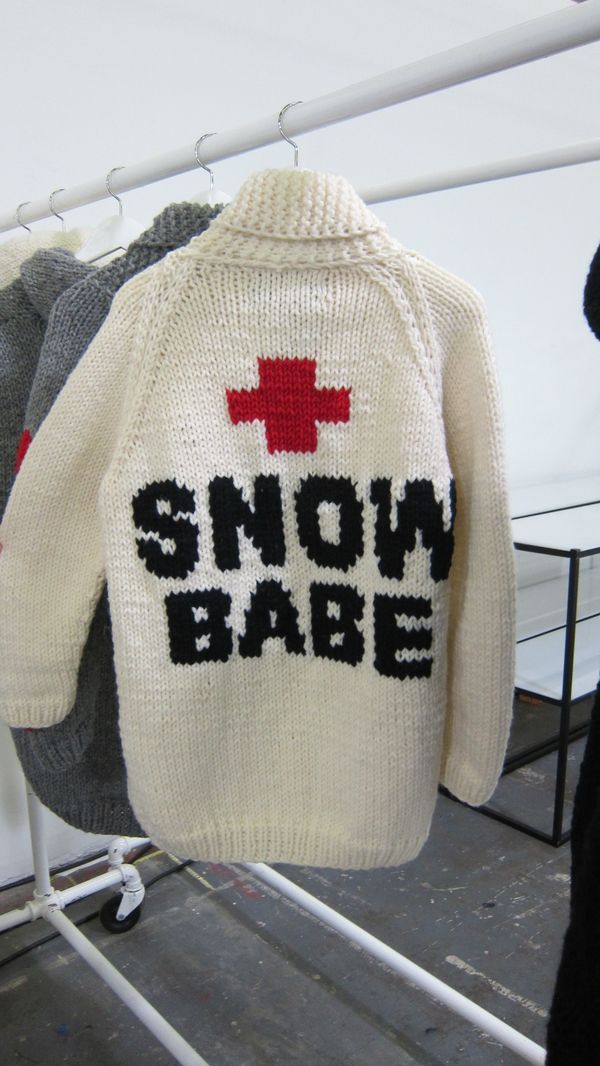 Ground-Zero
This eight-year-old brand from Hong Kong was one of the few denim-heavy ones to show at Tranoi. Its fun designs for fall included jeans and coats with embroidered patches of Asian “good luck” cats, a back pocket red tab that read “Bad Ass” and a spoof of The North Face logo on a puffer jacket that read “The Hottie Face.” 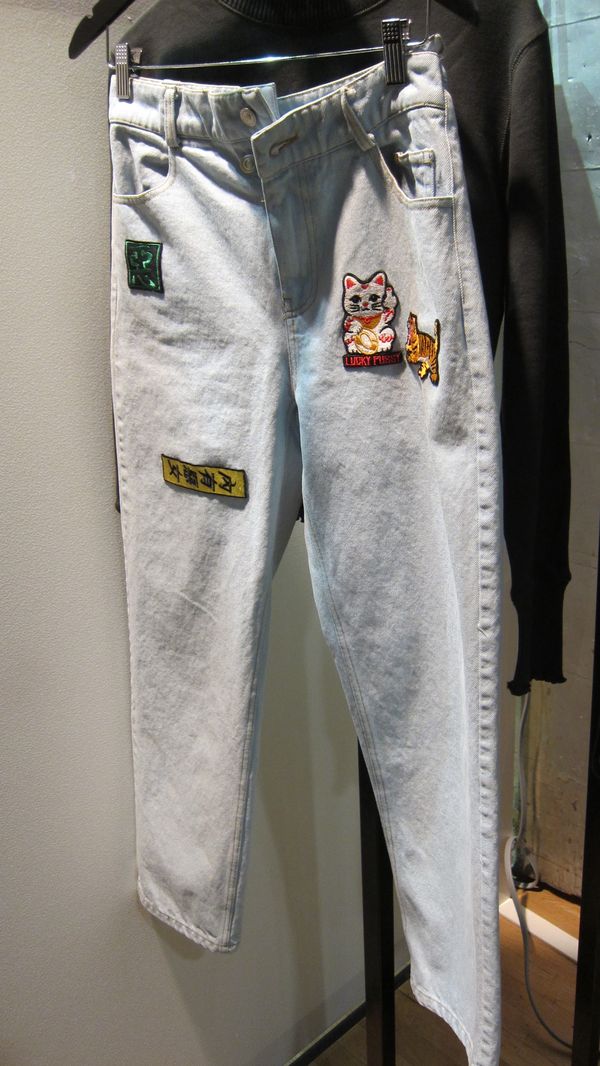 Hidden
A relatively new Los Angeles-based women’s brand, Hidden showed not just one of the most exciting collections at the Axis show but perhaps one of the best we saw all week. Offering denim dresses in a multitude of shapes and washes along with a stunning kimono jacket and pair of quilted denim jogging pants among many other great pieces, the reasonably priced label proved it is truly one to watch and know. 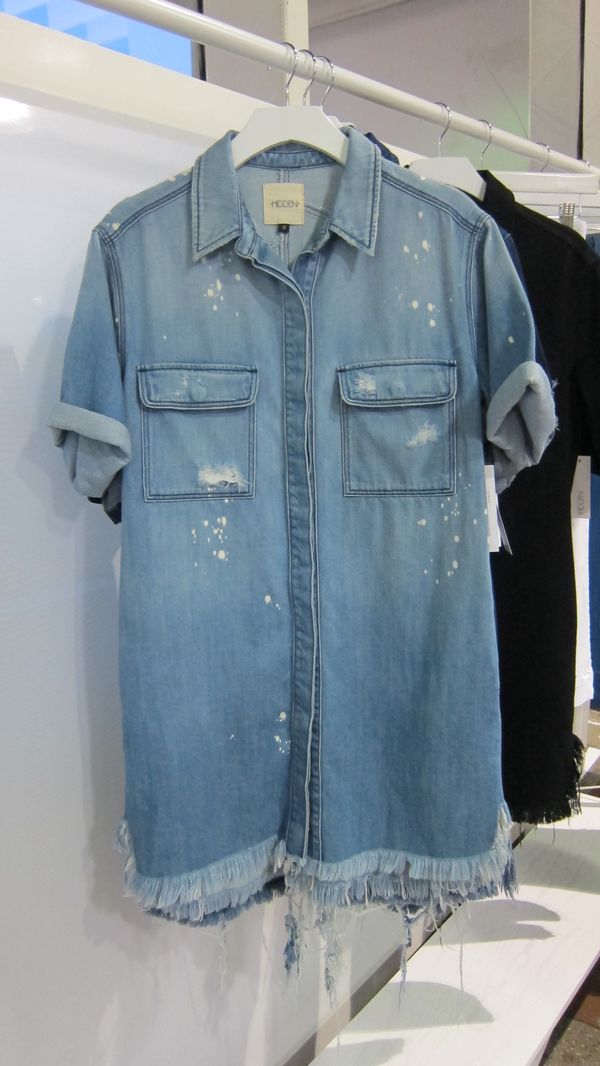 Hope
The Swedish brand never disappoints and its black polka-dot denim jeans shown at WOMAN were a highlight of another splendid collection. 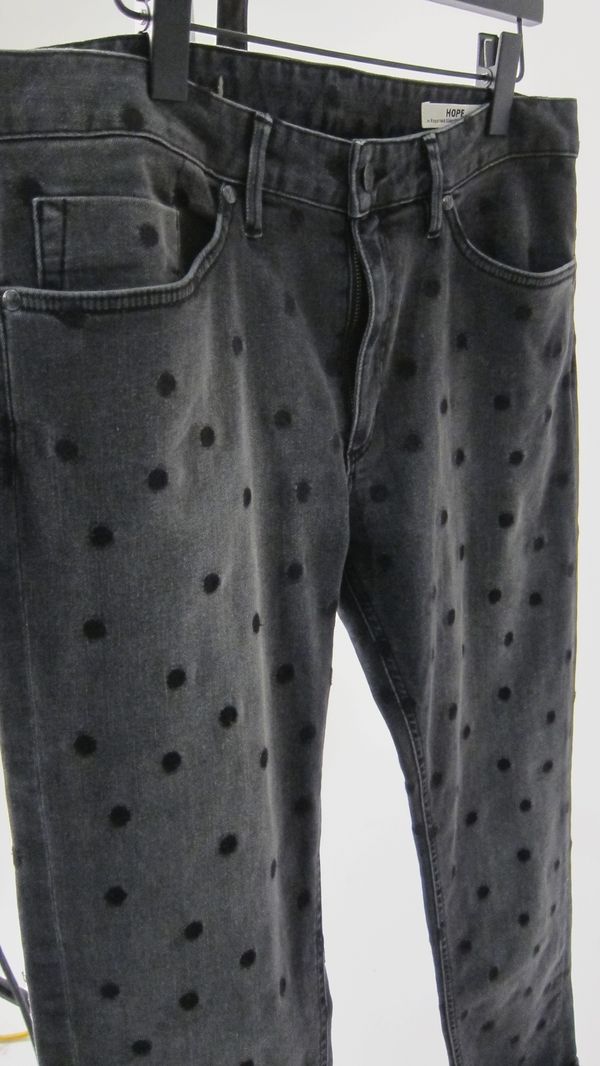 Jaeha
A rather new women’s contemporary brand from London, Jaeha made its US trade show debut at WOMAN with unusually cut or oversized pieces including denim culottes and a matching jacket. Designer Jae Kim’s use of proportion is truly one of a kind. 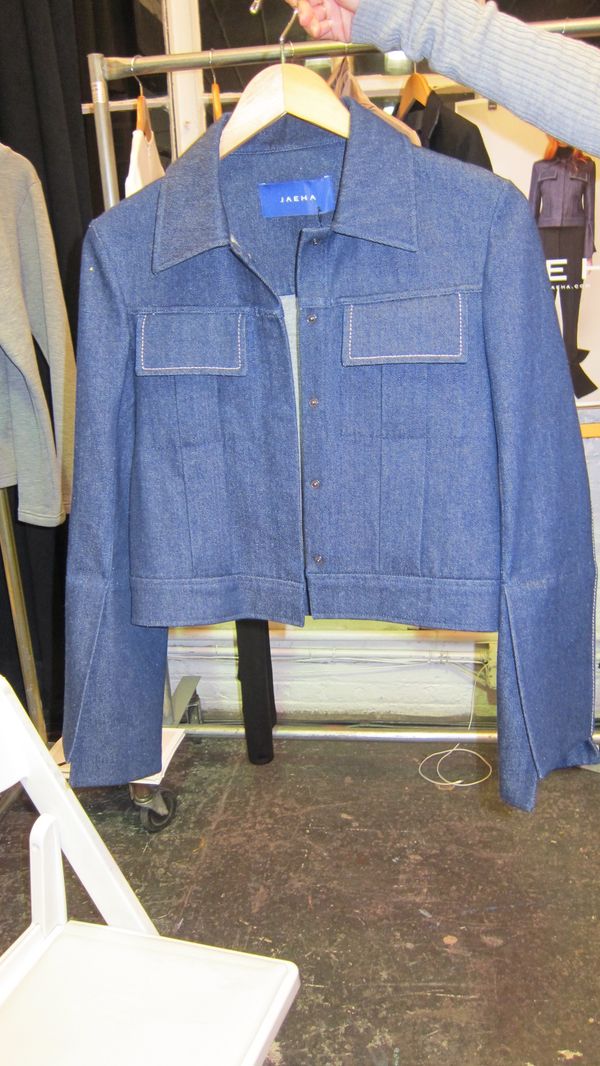 Katie Gallagher
The acclaimed young designer was one of the few American brands to show at Tranoi this season (she had never done a trade show before) and her all-black collection was based on the very first one she created years ago. Particular standouts were a leather jacket with puffy sleeves and biker made from animal hide. 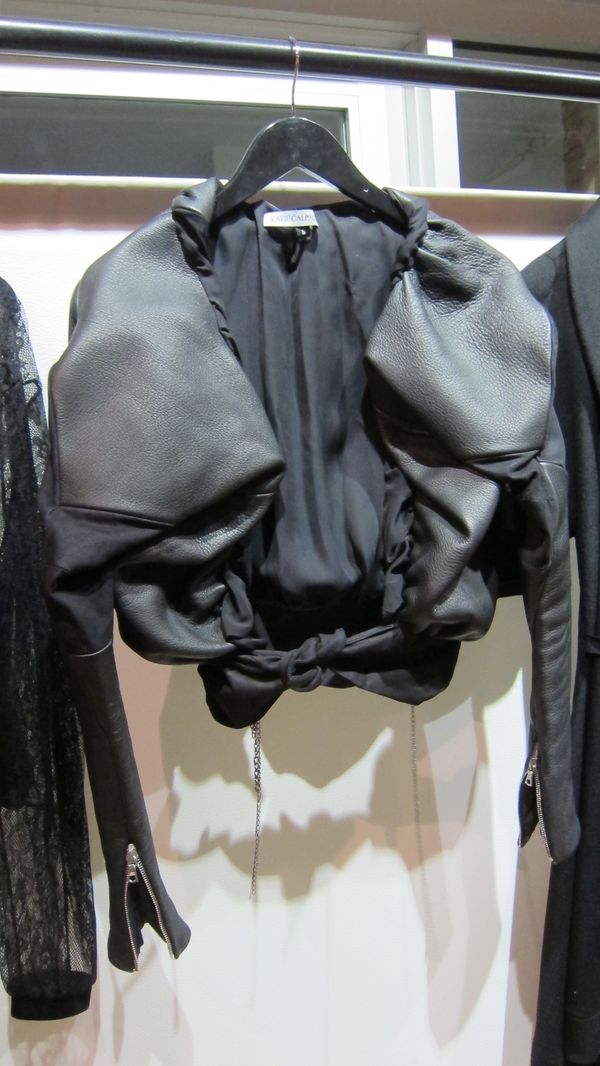 Lotuff Leather
Handcrafted in Rhode Island, this simple yet sumptuous leather line for men and women showed outstanding purses and other accessories at WOMAN. Our favorite? A navy U-shaped one with an electric blue interior. 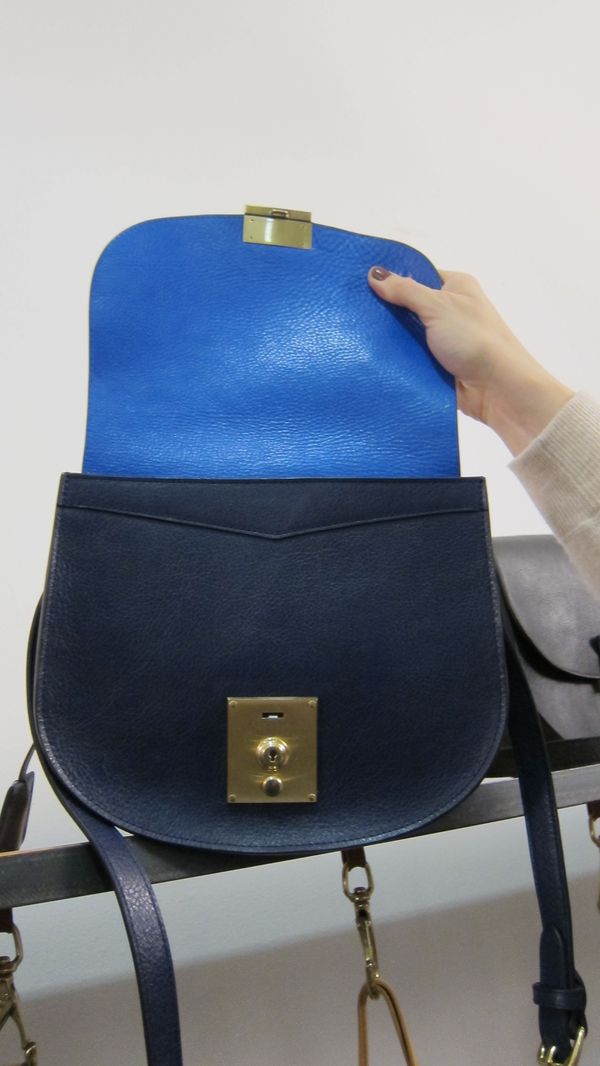 Lupe
A unisex line from Italy, Lupe was our pet new discovery at Coterie’s TMRW section for up-and-coming brands this season. Its key pieces included a denim jacket with an embroidery of Mexican dancers on the back and a needlepoint-like embroidered denim shirt that reads “I Hate Being Bipolar, It’s Awesome.” 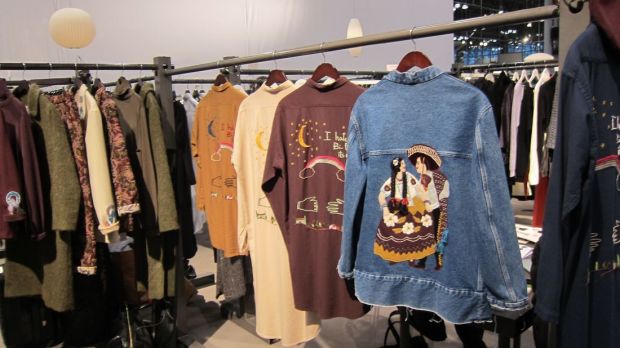 Older Brother
Older Brother is a gender-neutral line from Portland, Oregon that offered some of the best denim pieces at WOMAN. Key for the season are boyfriend-inspired jeans (no surprise there since the line’s unisex) with knee patches and a matching jacket. 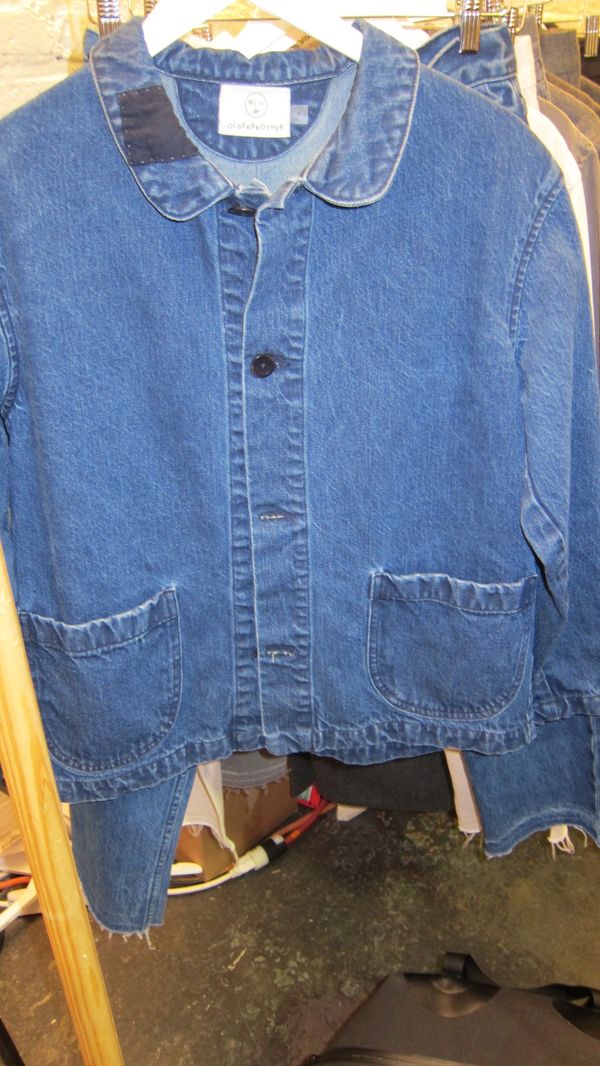 Oracle Gifts Limited
This Hong Kong-based line of plastic accessories and jewelry made its US trade show debut at Tranoi with a whimsical assortment of brightly colored cell phone cases, including one that is shaped liked an old-fashioned corded phone. Way cute! 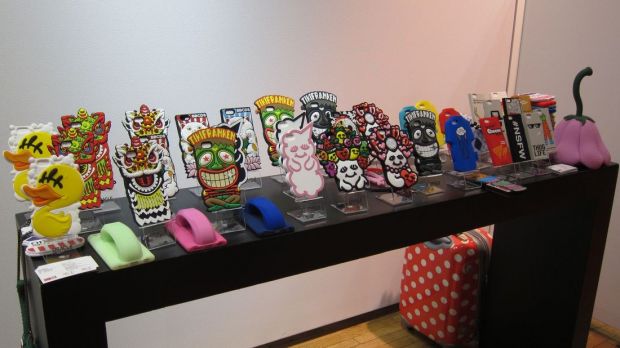 Robin’s Jean
Robin’s proved at Coterie that no one does bling and eye-catching washes like it does. It wowed buyers there with destroyed black denim, beaded jeans and jumpsuits with super distressed–and super unique– treatments. 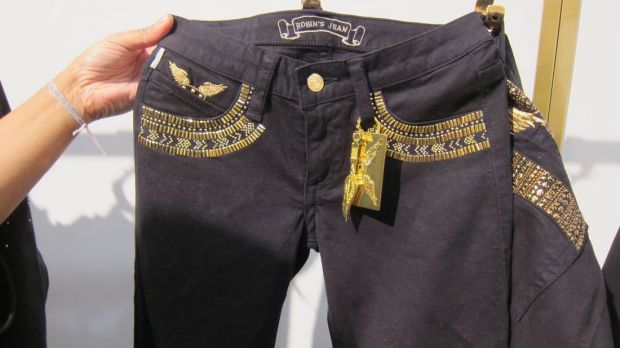 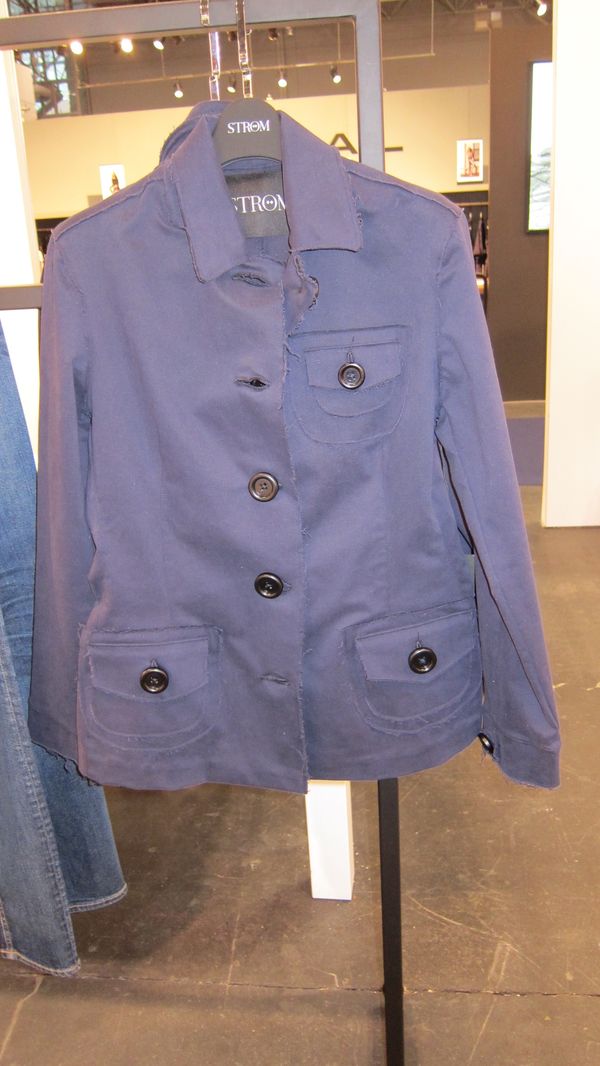 Zespa Aix in Provence
One of the few footwear brands to show at WOMAN, this French label served up an assortment of classic looking sneakers and dressier shoes in superb leathers. The cream and white low-tops with just a hit of contrast color/material on the tongue and in the back looked both luxurious and timeless. 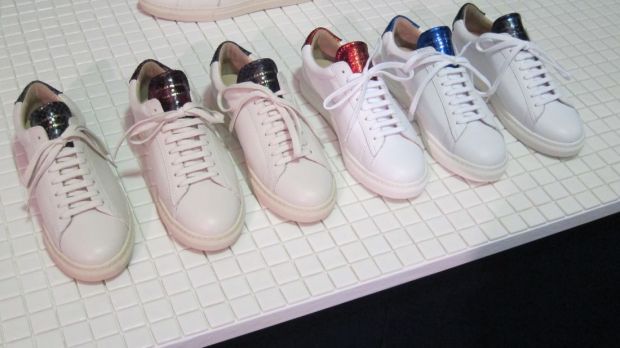