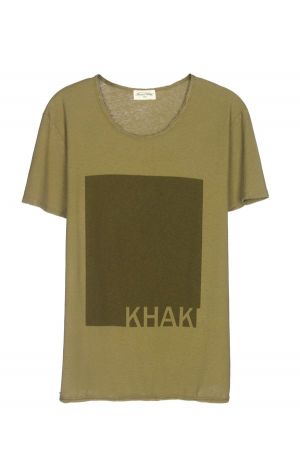 by Maria Cristina Pavarini — July 10, 2014
Urban French sportswear brand American Vintage has participated in Pitti Uomo with the aim to further grow internationally, especially in Italy. On this occasion, it has launched the capsule collection of men’s t-shirts “Color Block” for its next f/w season. The line is characterized by men’s hues such as blue navy, burgundy, kaki and coal as well as geometric prints.

The brand was founded in 2005 by Michel Azoulay. It was born as a jersey focused men’s collection and now it is mostly sold to women (85%). It is distributed to 2,000 wholesale stores worldwide in 24 countries, 50 monobrand stores and 45 shop-in-shops. Despite its major market remains France, export represents 65% of its export in volume and 45% in terms of value. Major foreign market is Germany followed by Greece and Spain. By 2015, they want to further expand in Italy, UK, Scandinavian countries and Asia, with the consciousness that they will need to sign a joint venture in order to grow in this market area.

They closed 2013 registering €61 million sales and expect to grow to about €72 million by end 2014. Presently, 60% of their turnover comes from monobrand stores.

Their two major yearly collections offer 170 pieces for women (in 40 colors) and about 60 for men (in 30 colors) per season. Eighty percent of the collection is available in stock throughout the whole season. “We focus great attention on quality and materials. Collections are manufactured in Europe and we employ only Italian and Japanese fabrics, mostly natural sophisticated fibers such as, for instance, Supima cotton and silk,” commented Azoulay, referring to an average retail price of €65-€70 and an average ticket for €110. “When I started this brand I wanted to create a good compromise between a creative and a commercial project. And – after fights and difficulties - I finally made my dream come true. Now what makes me progress is the idea to start being everywhere - be in London, Copenhagen or Hong Kong.”