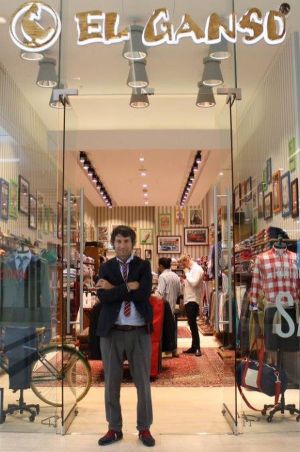 How will the new Westfield store add to El Ganso’s London retail presence?
The Westfield shop marks our fourth London store opening, adding to our existing locations in Carnaby Street, King’s Road and Seven Dials in Covent Garden. We feel that we have targeted the areas that fit the profile of El Ganso and its customer base. Commercially, it usually takes about a year to see proper results and establish customer loyalty at any one store, but we’re hoping the new Westfield store will perform well.

As for the Westfield store’s specifics, what defines the general concept and the interior design?
The 1,300q ft. store offers menswear only. In our larger stores, such as the one in London’s King’s Road, we also offer womenswear and children’s wear. Menswear account for 80% of the business today but we are in the process of extending the women’s range and have hired more designers to develop the range.
The look of our stores is quite consistent. It’s hopefully welcoming in feel and the design is inspired by our own homes, with striped wallpaper, lots of different pictures on the walls and colourful carpets.

El Ganso opened its first store in 2006 and you now run 115 retail spots worldwide. Which countries are key and where will further stores open?
The European countries are the most important ones, particularly the UK, France, Italy and Belgium. We run five stores in Paris and a sixth one is due to open in September, followed by an additional store in Toulouse a bit later on. At the end of the year, or at the beginning of 2016, we’ll be opening the doors to a new shop in Brussels.