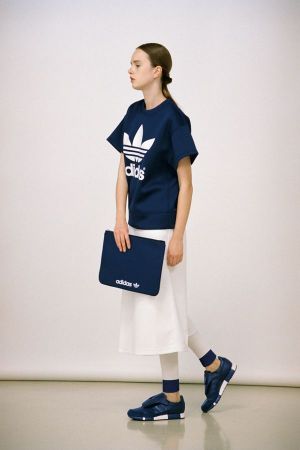 by Lorenzo Molina — March 09, 2016
Despite of the increasing competition in the sportswear market, the two indisputable leaders in this segment are two longstanding players: Adidas and Nike are the favorite brands among the young target group (14-30 years) by far in Germany, occupying the first and second position respectively on a top ten list elaborated by research firm Access Marketing Management e.V.(AccessMM). Eight out of every ten male- and female interviewees mentioned the three-stripes brand or the Swoosh one as one of their three favorite ones, both names keeping a great distance to the third place, occupied by Puma (four out of every ten interviewees picked it). 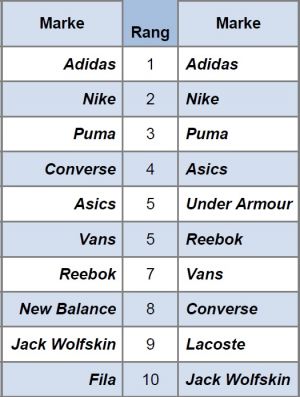 Top 10 fav brands among young Germans (right column: men / left column: women)
Among the rest of the names filling the top ten, there are remarkable gender disparities in terms of brand preference. One of these cases is Converse, which occupies the fourth position among the favorite labels for women (left column), while in the men’s list it ranks on the eighth place (right column). Besides, the choices were uneven between both genders: New Balance is the eighth brand-to-go for picked by the ladies, while it doesn’t sneak into the gents’ top ten. Under Armour, who didn’t appear in the women’s list, scores a fifth position among the male survey participants.

In terms of spending, the German youth spends 458€ per year on sportswear products on average. More surprising is the fact that over a third of the respondents spend 500€ or more during a single year with a considerable gender gap: men spend on average 573€, over 200€ more than their female counterparts (340€).


The report Sportswear 2015 of AccessMM was carried out during the last quarter of 2015. The results are based on face-to-face interviews with 1,299 individuals of young consumers (14-30 year old) and over 93,000 brand judgments.