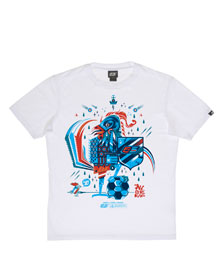 55DSL, PANINI TEAM UP FOR BATTLE OF FOOSBALL

— April 08, 2010
The Italian streetwear brand 55DSL has teamed up with the world renowned sports collectibles company Panini to launch the Galactic Battle of Foosball. 55DSL and Panini will host local contests of bagatelle across the globe, with the winners scheduled to gather at the final challenge in Bassano del Grappa, Italy in mid-June. The grand prize winning team will be sent to the South Africa Soccer Championships with 55DSL creative director Andrea Rosso in July.

Set to take place in seven countries — the US, UK, Japan, Italy, France, Greece and Colombia — the competition will comprise teams of two in contests in each country. To prepare players and consumers for the enormous launch, 55DSL and Panini have created a tees pack inspired by the world’s top football countries. Comprising 10 T-shirts created in collaboration with 10 different international artists and one celebratory tee designed by 55DSL’s creative team, the tees pack will be sold in 55DSL stores worldwide starting in April.

A super cool free iPhone and iTouch app on the App Store related to the contest also will be available. Tees will be sold in select stores. For the complete list of participating stores, visit 55DSL.com/foosball.

55DSL was founded in 1994 as a spin-off from the Diesel group. Driven by the action sports arena, it evolved to become a lifestyle brand influenced by graphic design, urban culture and music. It remains a young, dynamic company distributed worldwide with a strong presence in Japan, Italy, the UK and USA.

The Panini Group, established almost 50 years ago in Modena, Italy, with subsidiaries throughout Europe and Latin America, is the world leader in the published collectibles sector and the leading multinational publisher of comics, children’s magazines and manga in Europe and Latin America. The company has distribution channels in more than 100 countries and employs a staff of over 800.