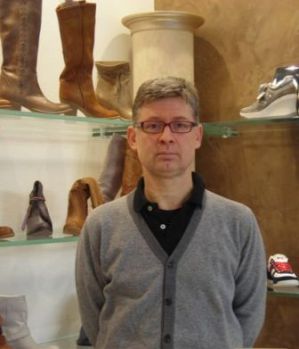 by Maria Cristina Pavarini — February 22, 2011
Selling footwear today is a much harder task than in the past, according to footwear specialist Giuliano Galeotti, owner of the Gold and Galeotti stores in Città Di Castello, in Central Italy. Whereas in the past customers bought more pairs every season, today they buy less while looking for a perfect mix of quality, price and brand.


"The present time is full of contradictions and the market is more complicated than in the past. Right now we are facing a real slow-down in consumption since people now tend to buy less while getting the highest satisfaction from their purchase. You have to be able to offer them a perfect mix of quality, price and brand. And if in the past they normally bought an average two to three pairs of shoes per season, now they prefer to buy only one that satisfies them, let's say, by 120%. Clients have grown much more demanding for this; if you sell them the false product in their eyes, they won’t return.

Moreover, we have to show how positive, lively and fashion-forward our stores are. At present we base our business on clients that buy throughout the season, and not just during sales. This is how we guarantee the possibility to offer always new products at our stores and maintain our image being a fashion-driven and fashion-conscious store. Our most fashion-driven and special styles are mostly bought by fashion-minded clients. If they didn't buy - which they do more than once in a season - we wouldn't be able to constantly change our offer. In a certain way the presence of Zara and similar chains have changed the way footwear companies perform nowadays. Once a product is sold, they often tend to stop producing more of the flash collections or fashion-minded products once they are sold out. This way, if a consumer sees a product he likes, he has to buy it very quickly otherwise it will be gone.

Up-market products what we have been selling mostly this winter for women are especially sporty boots in cuir, often with a vintage aspect. Among the bestsellers there were Bikkembergs, Harley Davidson, and Baker. On a more commercial segment there are brands like artisan-made boots by smaller companies like Felmini, a Portuguese brand, and Caterina Martens. Also successful were sporty calf-length boots like Emu and Ugg and ocher '80s style lumberjack boots by Timberland, Caterpillar and Docksteps.

Among most fashion-driven models the most successful models are ankle boots and decolletée. What has suffered most were expensive knee-length boots. People decided they couldn't - and thus wouldn't - afford them this season. As you see, spending power is changing people's purchasing habits. In general, heels for decolletée shoes were about 10-13cm high, often very clean and simple models; that way they can be worn both in winter and seasons in-between.

For men, the trend is moving toward elegant and Brit-style shoes and boots in Scotchguard waterproof leather. Less sneakers but more classic models are popular, even if they cannot be too classic because they may appear as too 'old-fashion'. The trend to wear more slim-fit trousers, and a general cleaner style is also driving the change.

For the upcoming spring season I think that always more aged and vintage style men's shoes will be a must - even if they had already slightly started appearing at the end of this winter season. The only doubt is if the consumer will accept that. Similarly for women, after such a long time with rounded toes, it's the turn for pointed toes and slimmer silhouettes again. On the one side they might be considered as an old style that the younger generation might not appreciate immediately and, secondly, after times when plateau shoes and rounded toes where easier to be worn by everyone, the new slimmer and high-heel models are much harder to be worn in the future.

Sneakers like the ones by Hogan or Paciotti are now almost out and only worn by older women. The very young customers prefer brands like D.A.T.E., Hummel and Drunky Munky. Also Philippe Model is hot, though most successful among men.

This winter black was the number one hue, though also earth colors were appreciated - and will continue to be popular in spring. Also grey, turtledove and mouse grey were most successful, as well as some red shades.

For next spring/summer ankle boots and lots of sandals will be hot - both vintage or jewel style. Heels in those sandals will be either super-low or 10cm high for girls, while medium heels will be out."