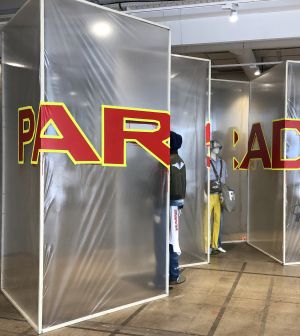 There was light at CIFF (8-10 Aug.) this season, lots of it, as the major Copenhagen tradeshow had partnered with the charitable Little Sun project for its SS19 installation, Enlightement. We were first introduced to this honorable initiative – co-created by Icelandic/Danish artist Olafur Eliasson to bring solar energy to African communities in need – at Revolver tradeshow’s Serata dinner a few seasons ago, and it’s encouraging that CIFF has followed suit. The fair brought in Virgil Abloh, Naomi Campbell, Peter Saville and Nick Knight to lend their creativity in different ways in a bid to promote these little portable, sun-shaped lights, and they were used within the Bella Center show-venue to great effect. 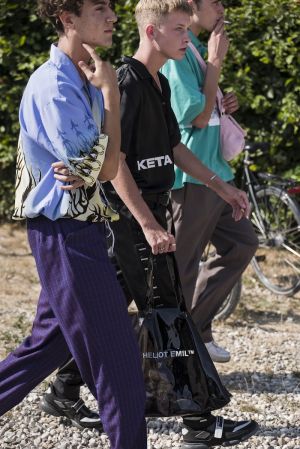 
As for the fashion on offer, CIFF has a knack for segmenting its sprawling brand-mix well. With the vast Bella Center space to play with, there’s certainly enough room to compartmentalize each style camp, dividing offerings as diverse as urban apparel, emerging designers and classic womenswear across several distinct showcases, such as Raven (young and emerging), Lab, Urban, Premium, Essentials, Future Classics and Sleek. 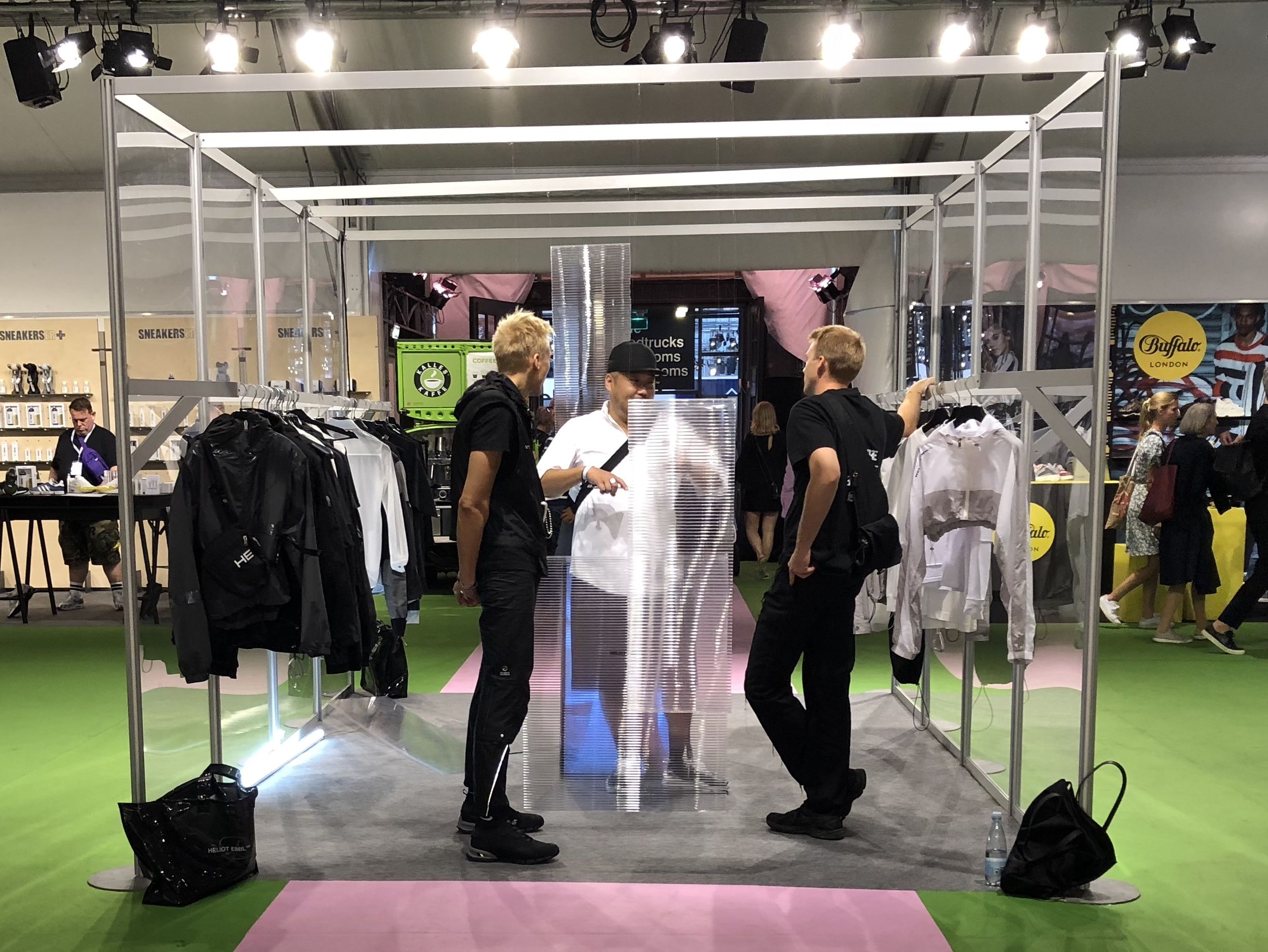 The exhibitors we spoke to – mainly within the younger fashion areas of Urban, Lab and Raven – reported a busy start to the first day, though visitor numbers dwindled in the afternoon. On day two, when we visited the fair, the flow was steady. Edwin Europe exhibited for the first time at CIFF. Said Ally McAnnally. UK wholesale manager at Edwin Europe: “We’ve come here as Scandinavia is an important and growing market for the brand. We’ve had a good show and the brand mix is impressive.” Tobias Alexander Tjoerstad, sales manager at Norwegian brand Holzweiler, also highlighted the brand mix as one of CIFF’s strengths. “We normally don’t exhibit the collections at tradeshows, but CIFF suits us well and we’re particularly impressed with the adjacencies this season, with brands such as Helmut Lang and Theory a few booths down.”

Here, some of our favorite SS19 CIFF discoveries: 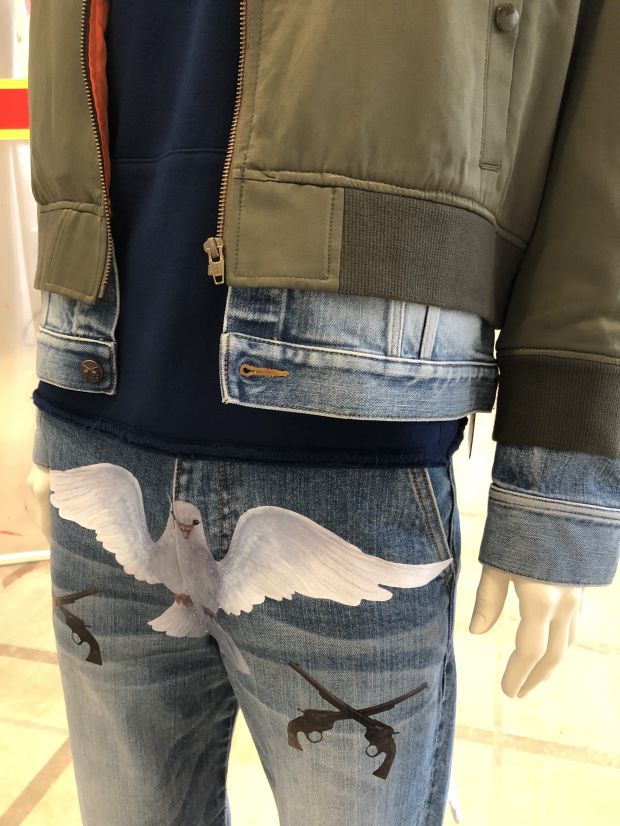 Taking center stage at CIFF’s emerging menswear designer showcase Raven, hot London designer 3.Paradis’ installation-style showcase stood out, and so did the innovative outfits within. The pictured look, a bomber/jean jacket hybrid and a pair of jeans – both adorned with a prominent hand-painted dove and cross guns to symbolize peace and a hoped-for end to gun violence – has been created in partnership with Japanese cult name Roarguns. 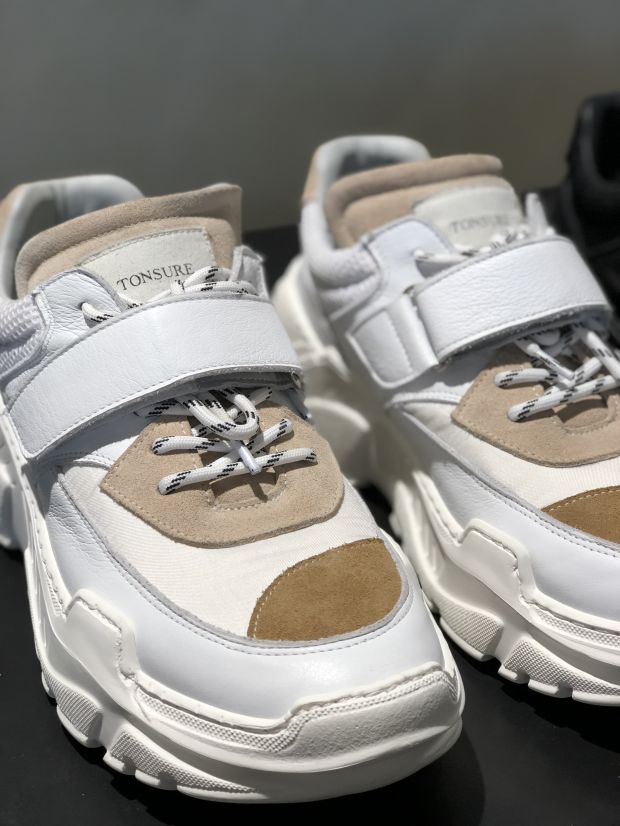 Tonsure, the four-year-old Danish menswear contender, unveiled its first foray into footwear at CIFF’s Raven showcase, presenting a Portugal-made calf leather and suede sneaker in two colorways – black and bone-white with contrast suede panels in different shades of brown. Anecdotally, there’s female pressure for the team to release smaller sizes, but alas it’s a men’s product only for the time being. 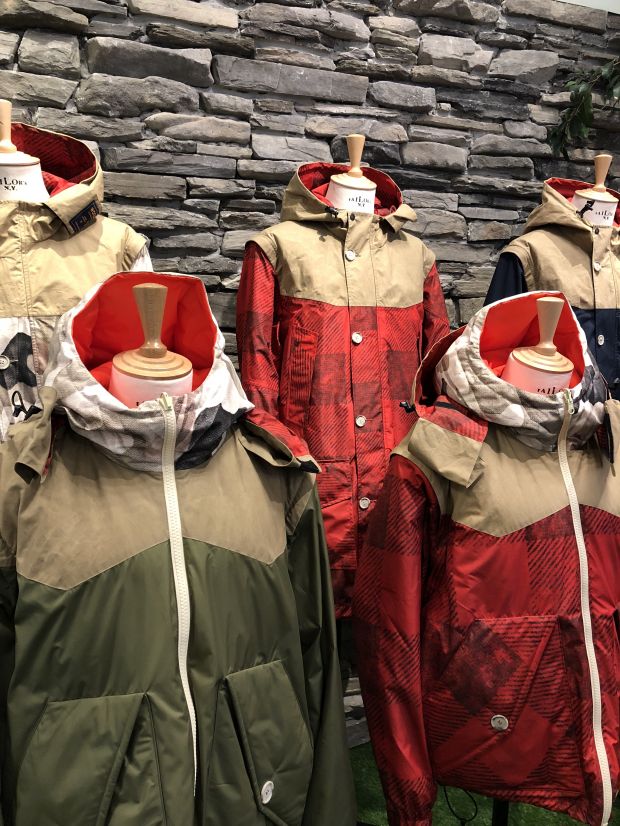 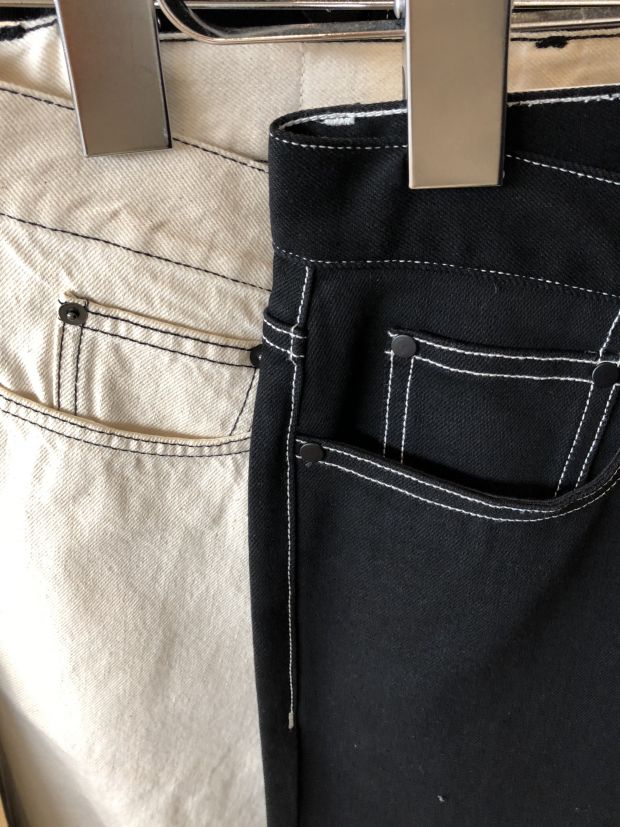 Norwegian brand Holzweiler presented a cluster of sustainable denim pieces, all of which featured contrast topstitching – a trend still going strong –in the options white on black and black on ecru. This green range of jeans and jackets are available for both men and women. As for Holzweiler’s brand news in general, it’s expanding internationally with new stockists including London’s Liberty and Selfridges. 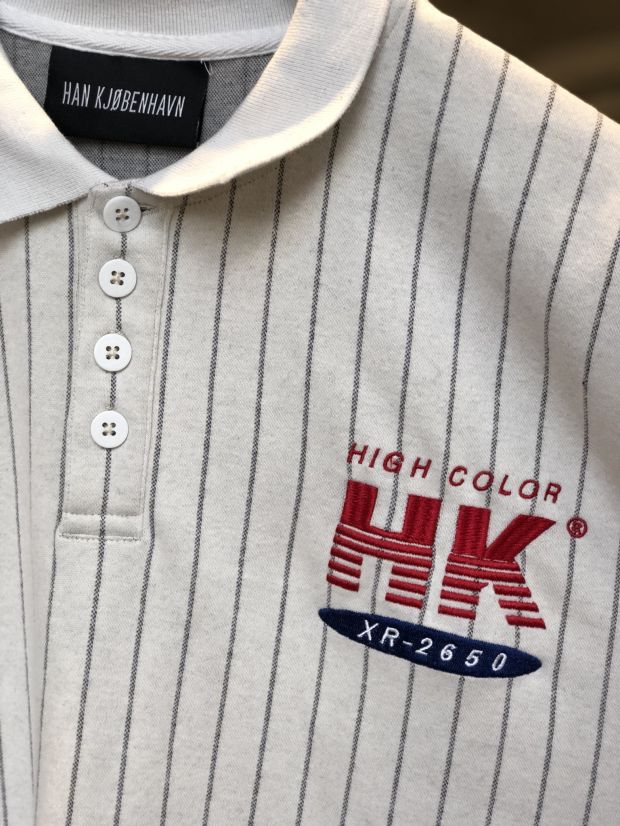 Han Kjøbenhavn brought its third womenswear collection to CIFF this season, offering its female fans pieces that mirror the brand’s men’s designs (also on display) including signature styles such as tracksuits and the embroidered polo shirt pictured. Come next season, Han Kjøbenhavn’s international expansion moves up a gear as it’ll start showing as part of Paris Fashion Week. 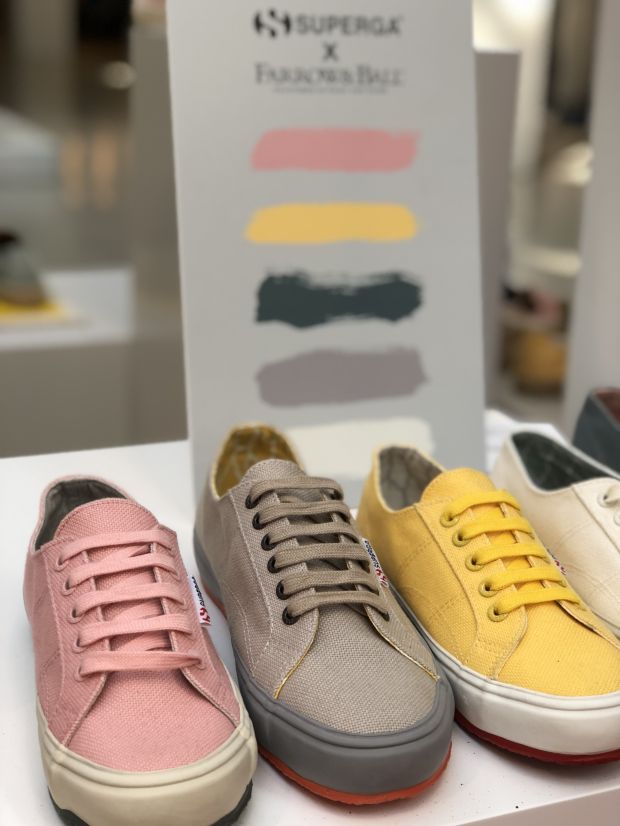 Superga is a collab-happy brand, and for SS19, they’ve joined forces with a number of names including Alexa Chung and British paints and wallpaper purveyor Farrow & Ball. The latter partnership has resulted in a cluster of canvas sneakers in soft colors (pink, mellow yellow and mushroom) with matching laces and a lining bringing to mind, you guessed it, wallpaper. 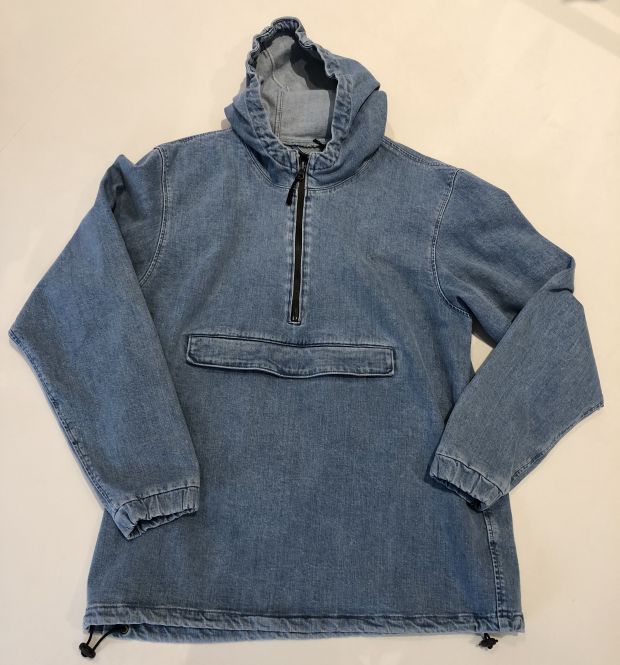 Edwin Europe’s waterproof pop-over hoodie marks something of a new direction for the brand, harnessing the sporty lux influences that have infiltrated the fashion industry. Come next season, jeans will be created using the same technical type of fabric, helping to invigorate the brand’s denim offer. 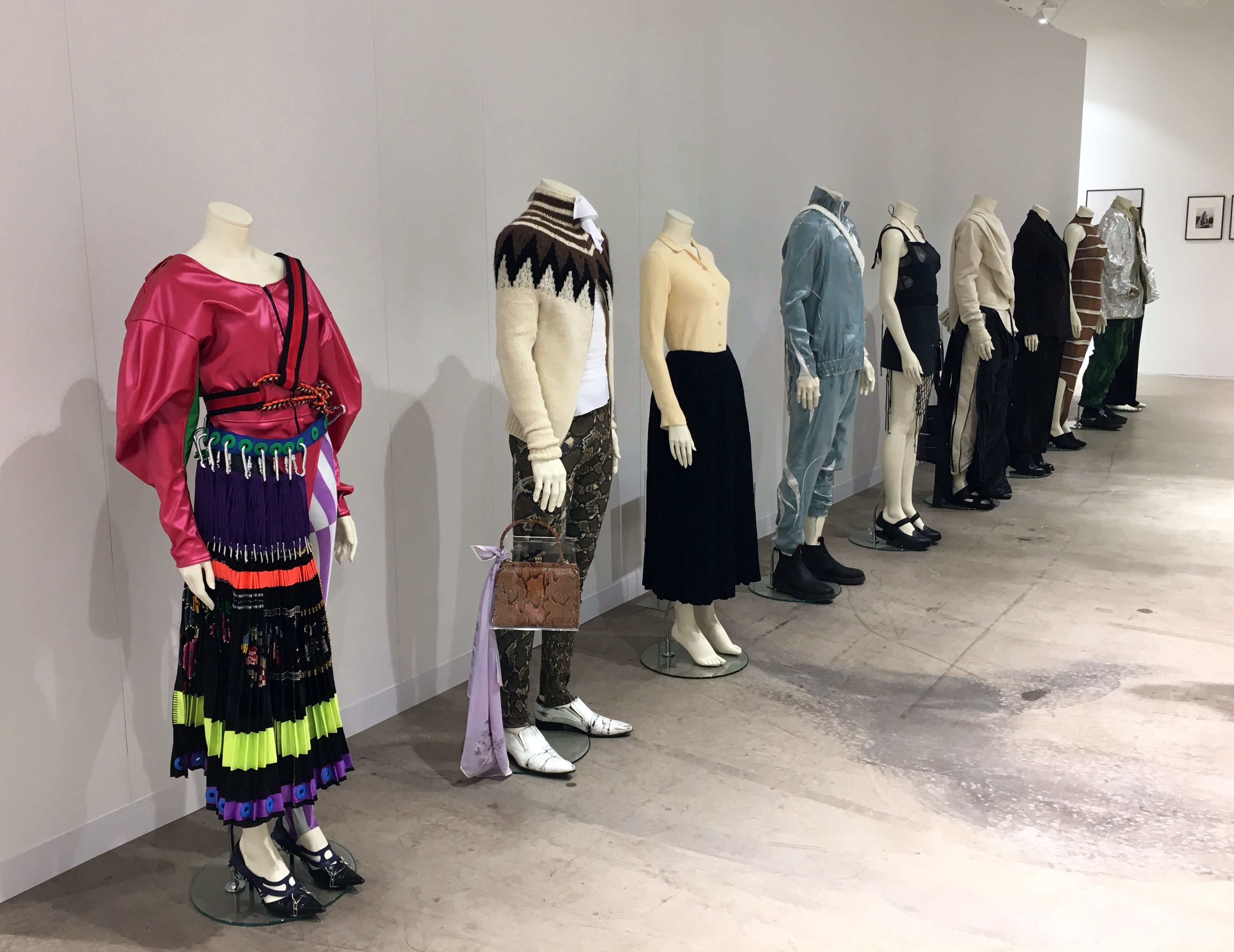