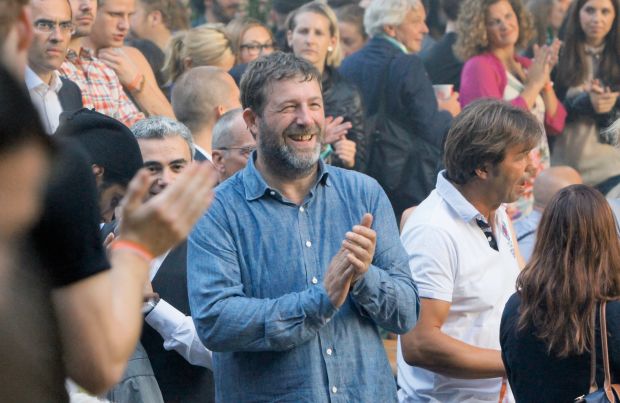 He knows the industry inside and out, and the entire industry knows him: Karl-Heinz Müller marketed brands such as Carhartt, Pepe Jeans and Marc O’Polo, set himself up in independent business in Cologne and later in Berlin in his store 14 oz., and as the organizer of Bread & Butter wrote a chapter in trade fair history. Müller has known success and failure, is well-liked, highly regarded and, ever since the gradual demise of BBB, equally controversial. Although things have calmed down for the 60-year-old, he is anything but a soon-to-be pensioner. On the contrary: in Berlin he is devoting himself completely to his growing retail business. He told us whether he’s fretting about the past, what he thinks of the Zalando version of Bread & Butter and how he judges the future of the retail trade.

It was clear to me that would be your first question. No, it doesn’t feel odd, and I don’t view it with any melancholy. Quite the opposite, it makes me feel a little proud to see my idea from earlier being implemented. Zalando has done a fantastic job putting the whole thing on as an end-consumer event. They are doing a good job, but there is still room for improvement. I am delighted that it has gone so well right from the start and the new Bread & Butter pleases me exceptionally well. One day it will be the largest fashion and lifestyle event in the world, as my trade show also was in its day. Only, the players are different ones. By contrast, most so-called trade fairs are boring “shake hands coffee gatherings,” where you only come across B brands and the corresponding buyers. It is the height of dreariness. Naturally, the top brands are investing in the consumers–after all, that’s where things are really happening. I said it already in the old days. Unfortunately, our industry took no notice.

Still: There was criticism in those days, certainly deserved, but also malice, mockery and abuse. How did you deal with it, and how do you see that now?

Sorry, but in my view the criticism at the time was unjust. I just want to say that here. I constantly had to struggle against those narrow-minded know-it-alls and people with misgivings. The worst were the “late followers” and the lemmings who only exhibited when the major, strong competitor was also there. They caused a great deal of harm to Bread & Butter’s image by being there. The fact is: a trade fair at the level of Bread & Butter was out of date.

I spoiled my exhibitors and visitors incredibly and for years led them into a dream world. I could no longer top my superlatives. To stage such an event cost a fortune. The major brands were no longer willing or able to pay the price for it. They used their budgets to expand their own stores and introduce digitalization. No one will be able to get an event like that running as a trade fair again. “Bread & Butter–Tradeshow for Selected Brands” is still the benchmark.

You know, in the end I was asking too many questions and hesitating too much. That is my self-criticism. I am thoroughly familiar with our industry. I should simply have gone ahead and carried out my idea without any backing, then I certainly wouldn’t have messed up. Going bankrupt like that in the public eye is certainly no fun and affected me greatly. It is pretty tough when fear for your livelihood is the main topic in your family and the children don’t want to go to school out of shame. The fact is that the people who previously made themselves look good by hanging around me and couldn’t wait to push their faces in front of the cameras and loved to drink my champagne spread the worst and most spiteful nonsense. But I also received help from a few good people, without which I wouldn’t have been able to handle it. At least I know who my friends are today. Finally, I learned a lot. Malice, mockery and abuse can’t spoil the great times I had with Bread & Butter. It was a dream. It was a fantastic time.

Now the various stores you have–have you ever thought: Why am I still doing all this to myself?

Unfortunately, Bread & Butter did not make me rich. During its heyday I could have sold Bread & Butter for a lot of money. As a result, I still have to earn a living. The stores are my passion, even though retailing presents a new challenge every day. During the Bread & Butter days I barely had any time or leisure think about my stores. Today I can devote my time to them far more intensively. I am very pleased to see how at ease my customers feel in my stores. I enjoy going to Pitti Uomo in Florence and Man/Women in Paris–the only fairs I attend–to purchase stock, and I like working with my staff. In the meantime, I no longer focus on textiles, but take a great interest in food und gastronomy–good catering and restaurants were always important to me, even during the Bread & Butter years. I wanted to offer something special in this area. Our Father Carpenter [coffee bar and restaurant] at the Blue Yard came about by chance, but I can envisage even more in this area.

At the 14 oz. stores there always used to be a separate womenswear range. Now it only seems to only be about the men...

Yes, I dispense with all the ladies’ trappings. (laughs...) First off, I don’t believe in so-called womenswear and, second, I haven’t got a clue about it. To me, seeing women all dolled up is an abomination. 14 oz. is no boutique and should never become one, either. I believe in unisex, especially as a premium genre–to me that is the future for cool women. Adriano Goldschmied, Citizens of Humanity, Aspesi, Barena, Harris Wharf London, Bergfabel, Majestic, Golden Goose, Red Wing Women, R.M. Williams, Woolrich, Canada Goose, Schott NYC, Mackintosh, and Paltò all represent this look. And that is exactly what you’ll find in my store.

What are the most difficult challenges being faced by retail today?

There are many factors. The rents are too high, which means only the major vertical chains can afford prime locations, which makes city centers desolate. It’s no secret that by now verticals meet across all categories, for what appears to be lower prices, and are often more fashionable and better presented. Retail and industry have run into problems with this especially for mid-ranged apparel, as the very large number of bankruptcies in this area shows. Today brands are no longer just a supplier, their monobrand and online stores have made them competitors of traditional brick-and-mortar retail businesses. And, not least significant, there is an oversupply. That makes fashion arbitrary. There is constantly a sale going on, driving margins down substantially. Plus there is the online business side: an even larger selection of everything can be purchased from some place at any time. That puts physical retail under tremendous pressure. The big players have the power to handle it and have also grasped that the market has become an end-consumer market. The consumer has the power; it is no longer in the hands of the brands or of the retail trade.


Nevertheless, there is a regular hype going on about individual brands which multibrand retailers can take advantage of...

I guess. I see that mostly with sport lifestyle brands and with a few selected luxury labels. Usually these brands have their own network of stores throughout Germany or Europe, meaning that only some individual retailers benefit. Today other segments such as food, travel and smart living for consumers have become more important, whereas the cult surrounding fashion brands has gone down considerably. I can see that with my kids: if their smart phone is not working, there is a big fuss, but if their jeans are ripped or torn, it doesn’t seem to matter. That used to be different. It had to be the 501 jeans–you simply couldn’t be seen wearing anything else.

To what extent is the current fashion retail crisis having an impact on you?

At 14 oz. I favor stocking niche brands which have strong appeal and attractive brands in my monobrand stores. As an independent retailer you’d have no chance of making it if your range of goods was indistinguishable from other stores.

First of all, it is not like there is no longer any interest in brick-and-mortar: Online operators are also opening physical retail stores. That means they have recognized that they need a tangible display window. For fashion it is important to celebrate it, especially because it is not essential for survival. For example, I am a believer in destination shopping or event shopping. A store doesn’t always have to have the same things on the racks. For example, I think it is attractive to change what is displayed in the store space every three months. The approach taken with Bread & Butter by Zalando as a fashion festival is a step in the right direction, too. That could be expanded even more with more products being offered, which can be purchased onsite, like in a mega department store. But in any case, an attractive gastronomy concept always has to be part of it. Fashion, food and partying.

Based in Berlin-Mitte, Karl-Heinz Müller operates these businesses:

At The Blue Yard Müller brings together concepts and brands in a rear courtyard at Münzstraße 21:

– Since 2015 the café/restaurant/take away deli Father Carpenter Coffee Brewers (together with his business partner, coffee guru Kresten Thogersen)

– Since 2016 a Stetson Store which also transitions directly into a multibrand menswear store with labels such as Tellason, Filson and Pendleton

– Another retail space for a menswear store is just being renovated right next to the café, where the Danish label Hansen will be the centerpiece, with other brands

– Since 2017: Müller has been running a monobrand store that sells the Saint James brand on the North Sea island