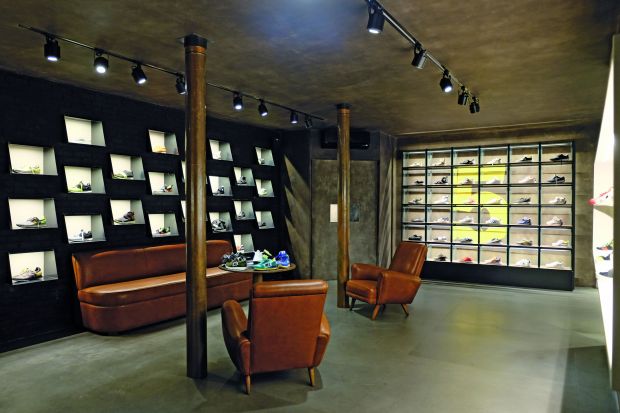 For our brand new Italian Issue we talk to several insiders and industry veterans. One of them is the Pecchioli family. Thanks to the family’s decades of experience, considerable expertise and varied talents, they have established a style empire in their native Florence.

Generally speaking, two kinds of tourists can be seen wandering the cobblestone streets of Florence. First, there are traditional city tourists: the culture-hungry, studious Germans in sandals patiently standing in line at churches and museums, or honeymooning Asians armed with selfie sticks, or nuclear families from the US, who boisterously share their enthusiasm for the art treasures of the Renaissance with the whole world. 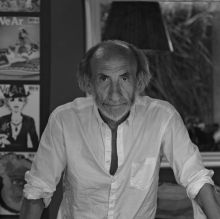 During the Pitti Uomo trade fair in January and in June, however, a third type enters the urban scene: the fashion business traveler. These illustrious personages, easily recognizable thanks to their fashionable outfits, come every six months to buy, sell and discover the latest trends. By definition, the fashion tourists have different interests from those of the classic art lovers and spend their time far off the beaten path of cultural landmarks. Nonetheless, they also have must-sees. One could almost speak of an unofficial fashion route used for trend and brand analysis that takes designers and buyers past the city’s most important shops.

Also on this route are Gerard, the Gerard Loft, Flow and the Flow Run, four stores belonging to the long-established Pecchioli family. Of course, stories of family businesses are not unusual in Italy. Here, traditions are upheld and companies passed on from generation to generation. All the same, the Pecchiolis are something different. All four Pecchioli children–three boys and a girl–found their way into fashion without ever completing formal education in that field. And all four always followed their own inclinations. Today they work together closely–and their unbroken success proves they’re right. 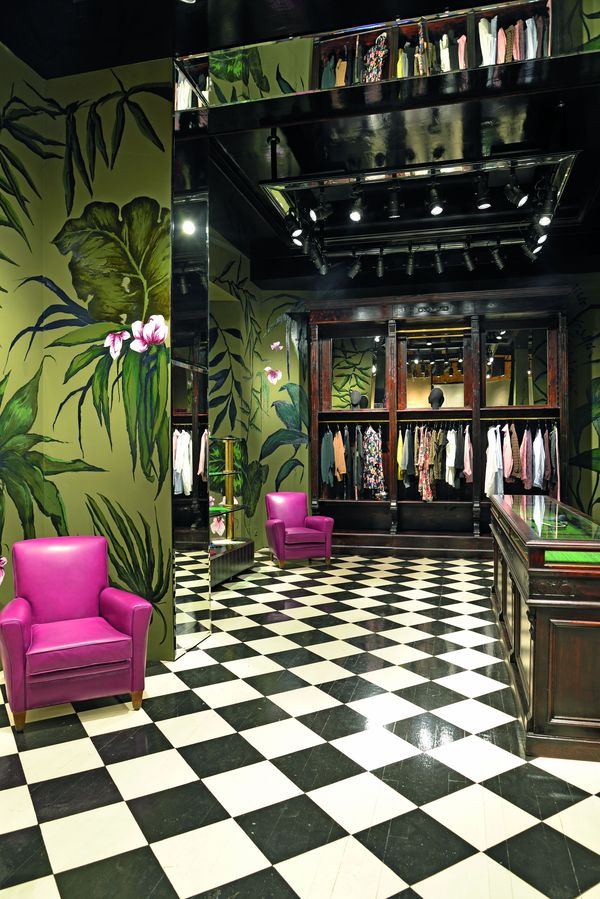 This family saga began in 1969. Paolo Pecchioli, who was 29 at the time, opened a retail shop on Via Calimala. Paolo had been working in retail fashion since he was 13, so he was already quite experienced. “Gerard was successful from day one. I broke every rule that existed until then,” recalls Paolo, now 77. “None of the Florentine retailers regularly went on trips to London or Paris the way I did.” What the restless and itinerant Paolo brought back home with him was welcomed with delight, and the golden years began. In 1979, he opened a branch store in Milan, followed in 1980 by first one, then soon afterwards three more shops in Tokyo, which he operated with a franchise partner. In the 1980s and 1990s, they also were solidly in the black. In 1981 Gerard moved to Via Vacchereccia and over the next three decades the name Gerard came to stand for fashion innovation and an ever-fresh and expertly curated mix of the most talked about brands. These decades cemented Paolo Pecchioli’s reputation as a fashion specialist.

As a result, it was easy for Matteo, the oldest son, to enter the fashion business in 1992. However, Matteo had other plans besides working for his father. He chose to jump into the monolabel business just emerging at the time and opened the first Replay store in Florence. This proved highly lucrative and so two further shop openings followed. Matteo also became involved in Replay in Milan and Siena. But the winds changed, and Matteo closed a few shops. 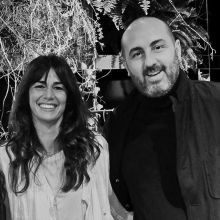 At this point, Nicola, the second-youngest Pecchioli, made his mark as a gifted shop decorator. He also worked for Replay–and dreamt of one day having his own multibrand store. In 2007 his dream came true: together with his wife, Gabriella, and his brother, Matteo, Nicola opened Flow, a 250-sq.-meter store in a former bank, which became a place where the Pecchiolis experimented. For customers, Flow is pure inspiration. The interior design by Nicolas, who finally has a chance to give himself free rein, is comfortably familiar, with a feel to it that is flower power and Bohemian all at the same time. Lush plants, colorful carpets, and heavy, spacious leather armchairs create an impression of generosity, yet project a laid-back atmosphere. The fashionistas spend hours there looking at the handpicked mixture of high-fashion brands and the most recent finds. During trade fairs, the most important international buyers pass through his doors. No one wants to miss out on seeing the labels Nicola and Gabriella have spotted once again.

But neither of them is interested in cult brands. “We buy on impulse,” the 45-year-old reveals. “And so do our customers.” Thus, labels such as Ulla Johnson, Péro, Jejia, Blaze, R13, Fortela, Blue Blue Japan or Ten C are not ordered simply because of their names. Nicola, who is the buyer for the men’s collection, and Gabriella, who is responsible for womenswear, select single pieces with a sure instinct, and in this way generate a completely individual Flow look, which extends from boho-chic and preppy elegance to casual and sporty flair. 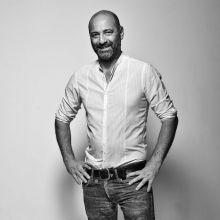 Tommaso, the second eldest of the Pecchioli brothers, has proven his fine touch when it comes to fashion. He is the proprietor of the Gerard Loft in Via dei Pecori. The Gerard branch store also stands for a very fashionable but relaxed approach. Tommaso has just turned 50, but the well-dressed shop owner doesn’t look it. He exudes a relaxed air and laughs a lot. Nonetheless, he is a realistic judge of the market: “In the last five years it has become more difficult to operate as an independent retailer. The customers are simply extremely well informed. They know exactly what they want. Introducing people to brands and looks is not really our job anymore–the challenge is more a matter of having the hyped products in stock, which, where you’re buying six to eight months ahead of time, makes it a risky business.”

For this reason, Tommaso considers himself fortunate to have broad-based international clientele who come to him because of his portfolio of Italian brands. Celebrities such as Steven Spielberg, Lenny Kravitz and Kylie Minogue are part of this group, as well as major figures in the fashion scene including Renzo Rosso, Adriano Goldschmied, Katherine Hamnet and Elio Fiorucci. Things are constantly on the move at Gerard Loft because the young target group should also be able to find what they want here. Tommaso adds, “Stone Island, for example, is a very important label for us. Through their cooperation with Supreme and Nike, they have remained permanently youthful. Co-branding products is also one of the secrets of our success: We have worked with brands like Levi’s, Lee, Napapijri, Sebago, Meltin’Pot, European Culture, Uniform and Evisu.” Thanks not least to Tomasso’s pioneering spirit, Gerard Loft has made itself a name in Florence: “We were the first shop worldwide to sell Evisu.” 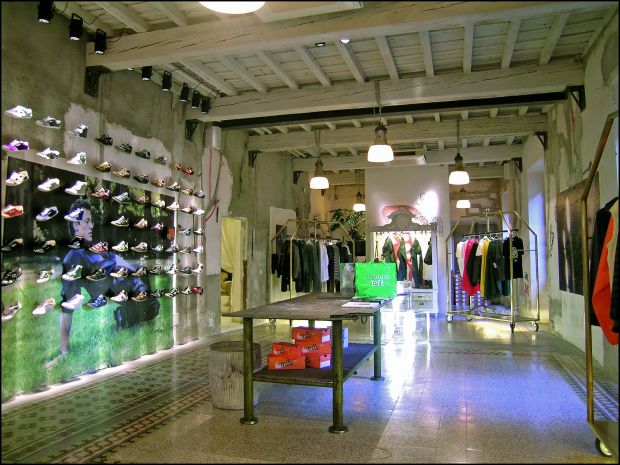 Photo: Gerard Loft
The store in Florence offers a wide assortment of womenswear and menswear

Since its opening in 1998, Tomasso has substantially increased the size of his store. Over the years, the original 80 sq. meters have turned into 400 sq. meters of floor space. The interior designer Nicola Frignani from Milan’s Wunderkammer Studio is partly responsible for the shop design, but Tommaso did the expansion himself. As a 13-year-old he had already worked in his parents’ shop. After completing school, he went to London for six month to improve his English. After that he traveled. His sojourns finally came to an end in Asia, or more precisely in Japan, where he took charge of the Gerard franchise shops. But eventually homesickness won out: “When you are born in Italy, some time or other you want to go back,” he laughs.

Back home, he found himself under the wings of his family, but Tommaso had seen a lot in Japan, and wanted to turn his own vision of a fashion store into reality. Fashionable, sporty, casual–relaxed and laid-back, but still well-dressed, just the way the world knows Italians–that’s the look he has propagated ever since in the Loft. In womenswear, brands such as Forte Forte, Erika Cavallini, Parosh, Karl Lagerfeld, Circus Hotel and Faliero Sarti are very popular. In the case of men, it is Roberto Collina, Circolo 1901, Briglia 1949, PT01, Aglini, Edwin and, of course, Stone Island. This year, Tommaso is celebrating 20 years in business, but something has never let up: his wanderlust. Buying has often taken him to other countries, even halfway around the world. In search of new brands for his customers, he does not just attend the Milan trade fairs White and Super. He also travels to Berlin, Paris, Copenhagen and Las Vegas.

And the baby of the family? Giulia, the youngest Pecchioli child, is the daddy’s girl of the clan. From 2000 to 2013 she had the exciting job of jetting around the world and managing the buying for her father’s business. Giulia learned a great deal about fashion–so much so that she began to want to create her own fashion. To get her father to go along with that was no easy task. However, she managed to convince him in the end. And even brought him on board as a designer for the shirt and knitwear collection bearing his shop’s name: Gerard. 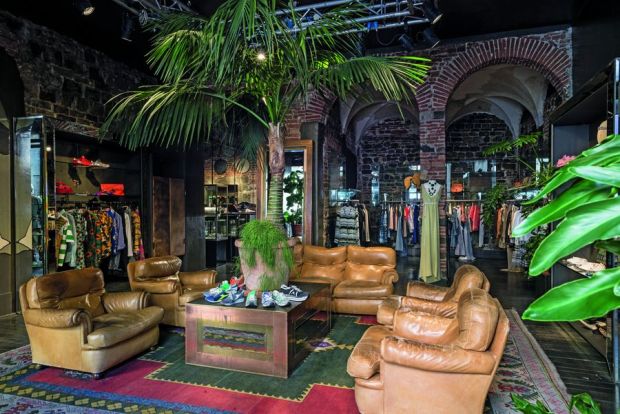 Paolo had already worked as a freelancer for Italian brands before, but now he is back at the drawing board creating designs. Italian, Indian and Japanese fabrics, some of them with prints designed exclusively for Gerard, form the basis of the collection. All shirts, which women also like buying in smaller sizes, start off in the washing machine, and are sold unpressed. Formal or starched clothing is not the father-daughter team’s thing. In 2013 a new shop in Piazza Strozzi was found and extensively refitted for the launch of their own collection. A job where Nicola starred once again: Together with his cousin, Francesca Lotti, he designed the interior with its wildly burgeoning, handpainted flowers.

The entrepreneurial spirit of the Pecchiolis remains irrepressible: In 2016, Matteo opened a 400-sq.-meter sneaker store, the Flow Run, in the pretty Piazza degli Strozzi. The story thus continues, and things are in fine shape for the next generation, too. Tommaso’s oldest daughter, Allegra, has just turned 18, and she also has fashion in her blood. She could not make her father happier than by joining the family business in three or four years. The same is true for Matteo: He would like his children–Leonardo, 19, Lorenzo, 16, and Eva, 14–to start off by studying overseas and gaining experience there and then return to take over the family business with fresh, forward-looking ideas.

Nicola and Gabriella also have three offspring. And Giulia, who still has no children, is thus not worried about the future of her fashion family. “I don’t have any children yet. But when I have some, I want them to live on Hawaii and spend the whole day surfing,” she says while smirking. The father, Paolo, smiles indulgently. There’s room in the Pecchioli clan for a couple mavericks, too. 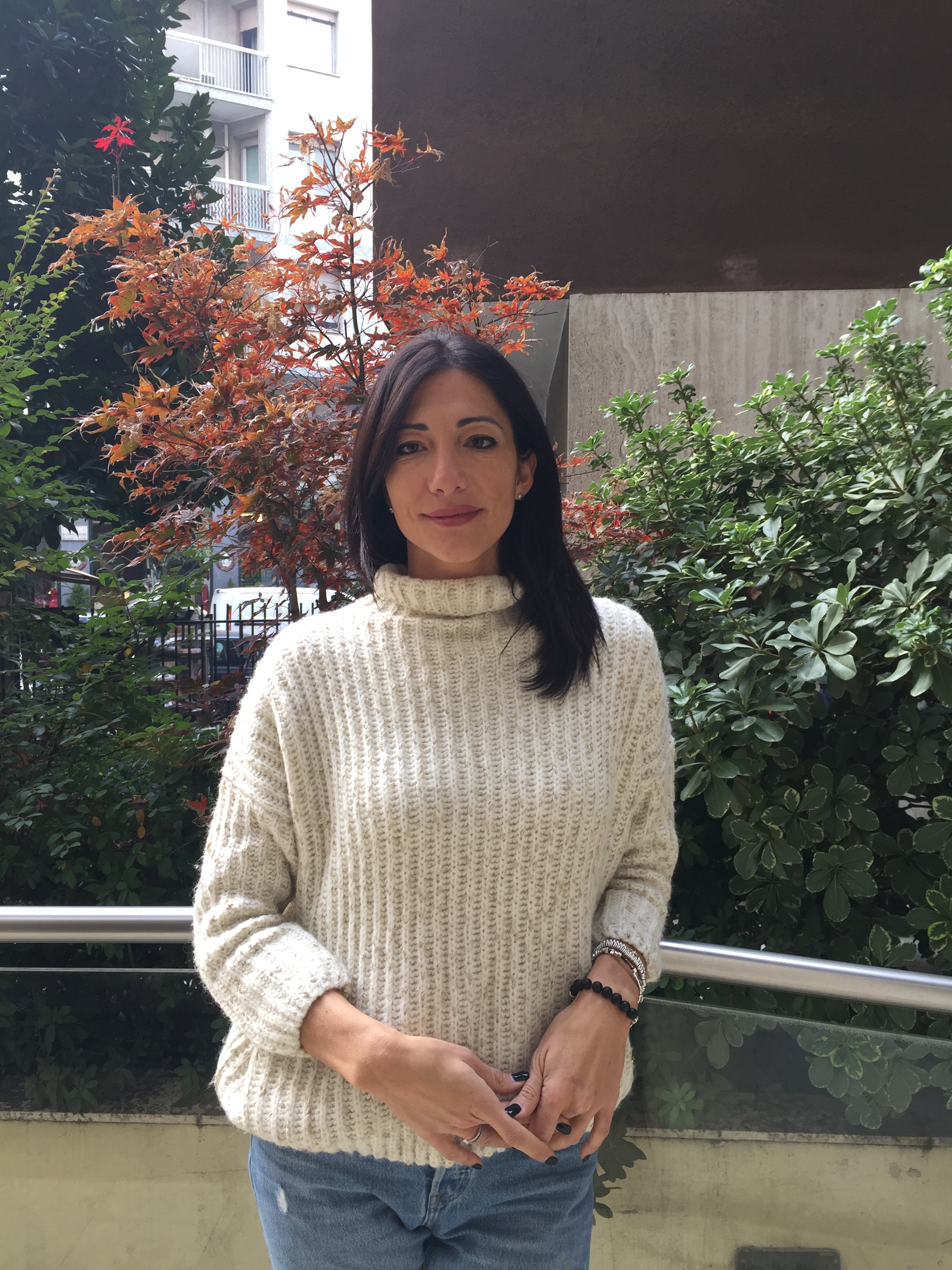 “When they enter our store they think they have discovered some new shopping spot.” 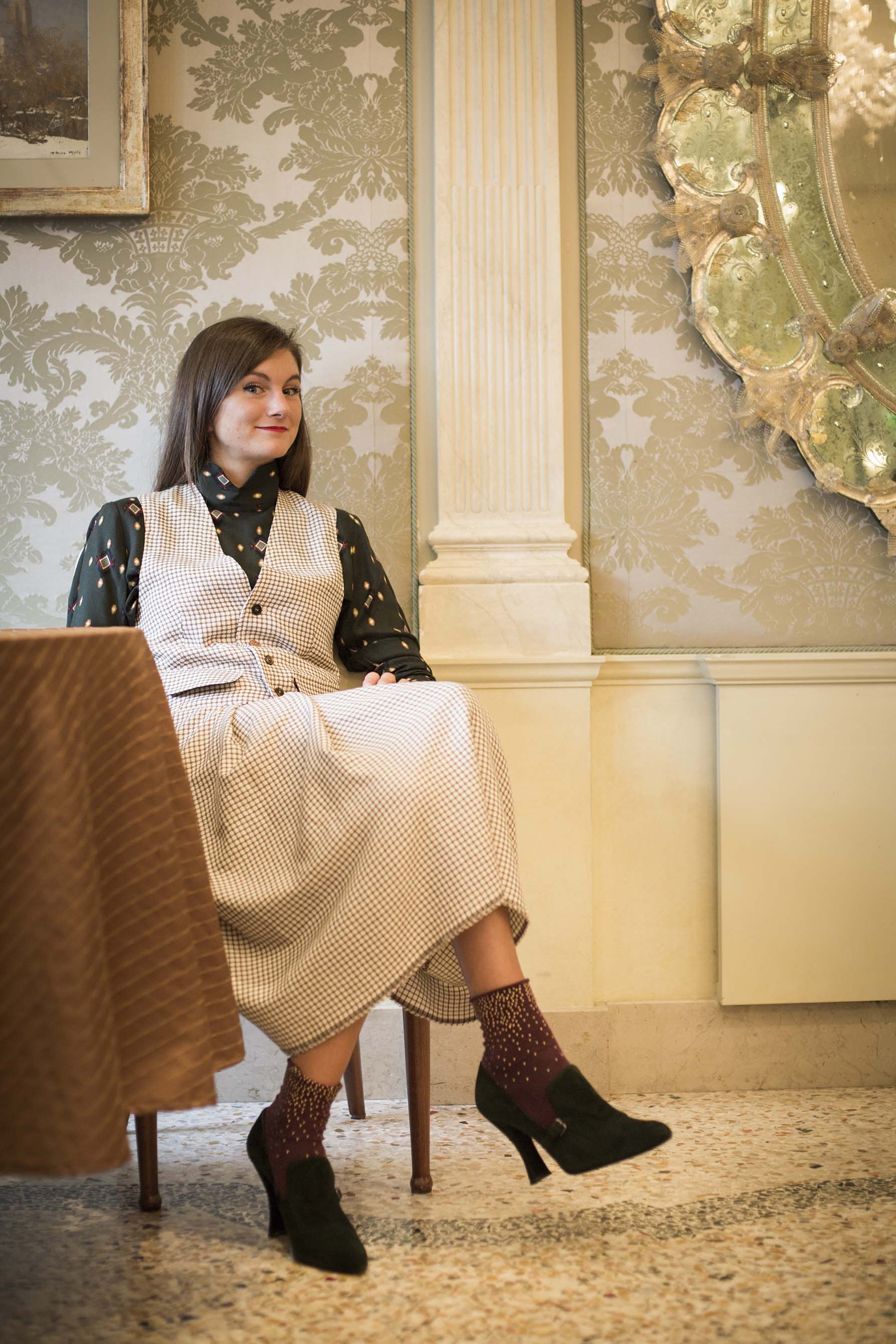 Chiara Sonda on her store: "It's a ceramic laboratory crowded with clothes"