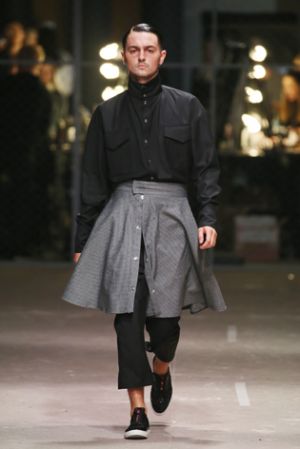 Futurum Moscow was the place to find emerging Russian streetwear brands during Mercedes-Benz Fashion Week Russia. The event, which took place at the Museum of Moscow, drew an industry crowd and plenty of cool, young Moscovites looking to check out the scene. The Russian Fashion Council is behind the event which had a jam packed schedule showcasing 20 upcoming designers in one day. Futurum Moscow highlights the best young talent of Russia’s fashion industry, and this season streetwear featured heavily in the line-up. Here’s a look at our top five denim and streetwear brands from this soon to be who’s who of Russian fashion:

Menswear label Alkhanashvili launched in 2016 by Georgia-born designer Luiza Alkhanashvili presented a gender-bending look for Spring ’19. The “Atlant” collection was an edgy mix of tailored suits, high neck shirts and overcoats mixed with a touch of militarism, punk and femininity. Alkhanashvili takes a philosophical approach when designing her collection. Each season she presents urban classics reimagined with inspiration from various people, conversations and perceptions of the world. For her Spring runway show, models marched the runway wearing black, white and gray military-esque urban uniforms. Yet there was a subversive feminine element to each look. Some were layered with skirts - both short and long - and others were belted in with corset-like layers. Still others had the back of their uniform cut out and were held together with metal chains adding an undercurrent of sexuality to the subdued tone of the collection. Gender bending themes are certainly part of the social conversation today, and Alkhanashvili makes a case for the look. 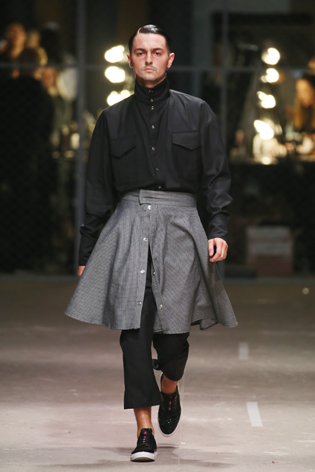 Promising new streetwear label SixOneSix made its runway debut at Futurum Moscow. The Saint Petersburg-based brand launched just six months ago with one jumpsuit and has quickly grown into a full collection. Featuring T-shirts with artistic graphics, bold bombers with one-of-a-kind hand painting as well as techy outerwear including a seriously cool blue parka - there seems to be an endless stream of creativity flowing from designer Boris Shilin. “I’m looking for inspiration in the problems in the world,” he said. “The main idea is the pain of modern living. The jumpsuit looks like a jail uniform and I want people to think about how they have imprisoned themselves in a digital jail,” he said explaining that social media like Instagram and Facebook makes people feel unhappy. Shilin illustrated his concepts “Fight Club”-inspired hand painting and graphics featuring the face of the tyrant Kaiser Nero, who Shilin says is the face of the brand. “He was a tyrant even for the Roman times. It’s a symbol of the madness going on right now, but in the digital space,” he explained. Shilin has big plans for SixOneSix and hopes to soon make it available at retail in Europe. So far though, he has successfully relied on Instagram direct for sales and it’s available on locals-only.ru - the largest streetwear platform in Russia. 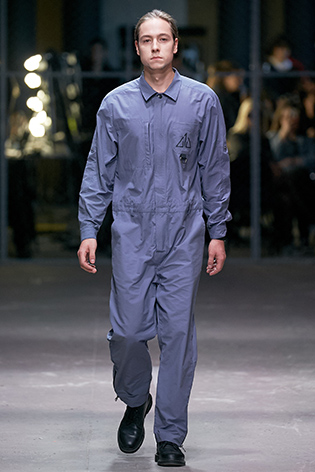 Created by artist Elizaveta Belinskaya, Be.Li.Ve studio takes a multicultural approach to design - and has some cool denim to boot. The Spring ’19 collection was a print-inspired cultural mashup, but with a cool modern twist. There were all-over ethnic prints ranging from Slavic to Aztec decorating kimonos and leggings in bright shades of teal and orange. Athletic stripes were applied to denim and a bright orange dress that played into the trending workwear theme. The denim came in light washes with a variety of silhouettes - a simple button front dress, a jumpsuit, and a jacket with matching skirt and denim leggings. Though the head scarves applied to hats were a bit kitschy, the metallic emblems and arrow graphics on long t-shirts added a cool effect. 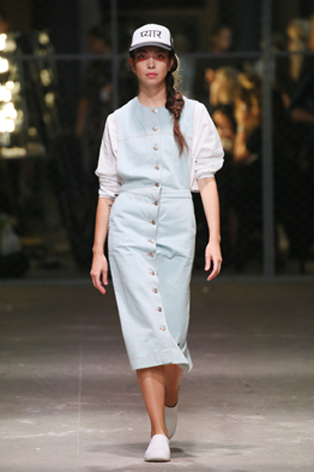 Lusine Avetisyan could be considered an artist first and a designer second. The designer’s brightly colored, bold FactiveFace collection features the designer’s prints which are taken from her original drawings and paintings. Avetisyan first debuted her collection in 2013 and her work was selected as the Best Project for Vogue Italia Talents. Typically her inspiration stems from three sources - graffiti, religion and images of artists. She features a variety of faces within her prints, which are decorated in graffiti-like fashion on her garments. Clashing colors prevailed in the Spring ’19 collection where Avetisyan used a wide variety of prints from bright yellow and blue Matisse- and Chagall-inspired faces to black and white splatters reminiscent of Jackson Pollock’s canvases. The collection was both bright and happy featuring easy summer dresses, printed separates and easy-to-wear androgynous suitings. 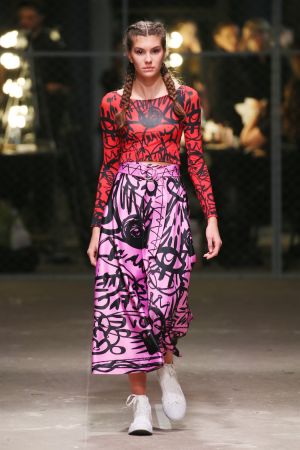 Drawing a large crowd to see his latest collection, Vassili Volchok didn’t disappoint. The designer presented his signature brand of minimalist streetwear - this season in a bold palette of red and black. Volchok, which is known for its punk-goth aesthetic, speaks to urban youth which perhaps explains why it has been wildly successful. With 47K Instagram followers, it’s clear the brand has a strong social connection. The Spring ’19 collection presented classic graphic tees, hoodies, crop tops, bombers, sweaters and clean easy-to-wear separates in a minimalistic palette. Patterns of red scorpions and gothic lettering on accessories and key silhouettes stood out amongst the otherwise clean garments. Typically channelling a nihilistic attitude - think skull motifs and this collection’s theme: “Crash Test Yourself,” Volchok gives its followers the incentive to perhaps question their own viewpoint. 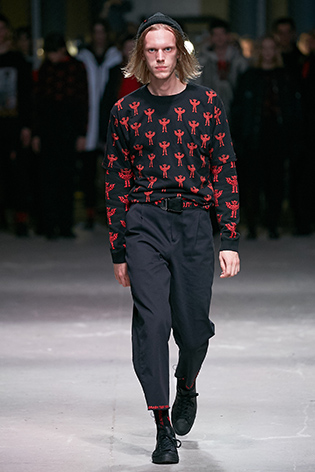