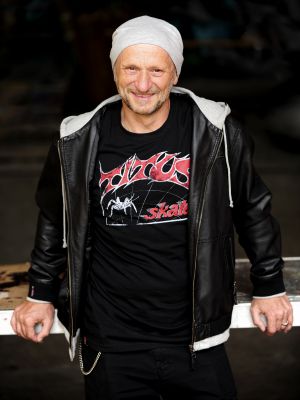 For our German Issue we talked to several insiders and industry veterans for a statement on how they see the fashion industry today. One of them is skateboard pioneer Titus Dittmann who started the Titus company in 1978 with a 95% market share and nearly ruined it financially when his dream of an IPO tanked on the stock market. Now it has recovered and is doing quite well. His son, Julius Dittmann, has taken over at the helm of the company. But what's up with Titus? He's in his own realm building skateboard parks with his skate-aid foundation in countries such as Afghanistan, Uganda and Tanzania. And he's monitoring developments in the industry. Here, he tells us what he still likes about the industry, what really surprises him and what was unthinkable 30 years ago.

“How simple and easy it was for me back in the ’80s: Back then I didn't have to give any thought to customer wishes or how the market was developing! I was simply a skateboarder and a part of this aesthetic in-group. Their attitude was my attitude. Their style was my style. We shared the same desire to express this through apparel! Because on average I was 15 years older than my students and all skateboarders, I was forced into the role of the organizer and steward, and it was not long before I was involved in the business, without having planned to be. First I was collecting group orders, later a retailer, and at one point or other in charge of the entire value-chain. In the beginning I only had to do purchasing for myself and constantly raise the order volumes to supply the rest of the market. That was it!

That's now almost 40 years ago. Skateboarding and the streetwear market have undergone extreme change. A mainstream market with an almost infinite number of features has developed from the small, do-it-yourself subculture. A desirable lifestyle has emerged from an awkward marginal phenomenon. Gucci backpacks for skateboarders and Thrasher T-shirts on ‘Gucci ladies’–in those days that was unimaginable for us. Four stormy decades with highs and lows in the market and in the firm’s development lie in between. Continuity of effort in striking a balance between hardcore and mainstream have firmly anchored the Titus brand as a major player in the streetwear market. Generating the necessary growth without losing credibility continues to be a major task for all suppliers.

Since my son Julius took over for me as CEO of Titus GmbH in 2010, I have now been lucky to be able to devote myself to the Titus Dittmann Foundation for seven years. Through the ‘social brand’ skate-aid I can apply my pedagogical, sociological and entrepreneurial experience and knowledge and make children strong by means of the skateboard. I have realized that the independent, activity-oriented youth culture of skateboarding is the perfect tool for helping children and young people build their personalities during the orientation phase of their development.”